Hurricane Irma: Pray for OP Churches in the Path of Irma

Hurricane Irma: Pray for OP Churches in the Path of Irma 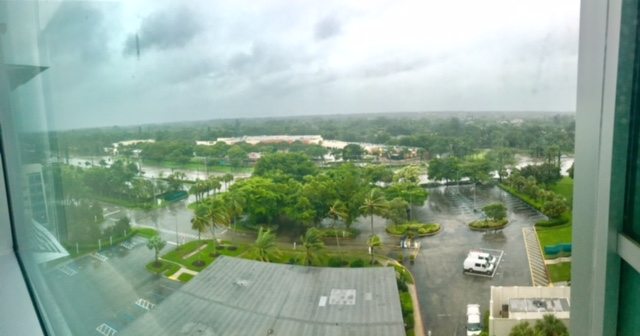 Dear friends and family of Christ the King OPC,

Good morning from Naples on what will most likely be, simply put, a day of enormous calamity here in Southwest Florida.

This morning our local news stations are predicting catastrophic conditions later this today as Category 4 Hurricane Irma approaches with a direct hit and a storm surge pushes on shore from the Gulf. The National Hurricane Center is predicting a storm surge of greater than 10 feet above ground in Pelican Bay, Port Royal, Aqualine Shores and Royal Harbor just south of downtown Naples and 5th Avenue, saying that “The same severe flooding could spread inland and inundate Lely, parts of East Naples and Bonita Springs.”  Ten feet means that single story homes and businesses would be under water. Our church’s rental facility is under threat of this storm surge sitting only 2.5 miles from the seashore, and our home is another 3 miles inland in East Naples - you can Googlemap our church address and see (3400 Radio Rd.)  Just now on our local news is reporting that people are still streaming into the last of the available storm shelters!

I spent Saturday morning making sure the last of church people were shuttled to places that will hopefully provide safety from the storm, finding available garages for the cars of friends who live in apartments, and making last minute preparations on our house: putting down the hurricane shutters, rolling up towels at the base of the sliding glass doors, bringing in the last of the pots, and cutting the screens on our lanai to hopefully save the cage from being picked up and blown away. A Haitian friend came and used my machete to slice the lanai screens wide open (photo, below). Even though it was extremely hard to do, this suggestion was made by our most experienced local meteorologist in order to minimize damage to the lanai “cage” from the wind.

Staying in Naples Through the Storm

Just after noon I packed up my son’s car with a suitcase and bedding, loaded my bicycle in the trunk, parked my own car in the garage bolting the garage door, and headed off to the Collier County Government Center (3347 Tamiami Trail East, if you want to see it on a map) and leaving the car in the parking ramp. (If the roads are impassable, I plan to bike the 5.5 miles to our neighborhood after the storm to check on our house). With Donna, Tim, and Grandma Chris safely up in the Atlanta area with our son Daniel, I am spending the storm at the Naples Jail in the Chaplain’s Office and in the adjacent Collier County Court House Annex where I spent the night. I’ve been given an empty office on the seventh floor where I brought my bedding and personal belongings. This building, I am told, was built 8 years ago to withstand a Category 5 hurricane. There is a hurricane proof second-story covered walk-way connecting the two buildings which I can use to go back to the jail later today. The view from up here on the 7th floor looks to the south and southeast, so I’ll have a bird’s eye view of the conditions on the ground today.

All evening last night I had the privilege of interacting with stressed deputies here at the jail, who have left behind their own families, and visiting cell-side with inmates to pray with them for their families and loved ones. One inmate, who has even come several times to our men’s Bible study, said that his family includes two elderly grandmothers with dementia living at home who would not be able to handle a hurricane shelter, and sorrowfully told me, “They don’t have the money to just load up, drive to another state, stay in hotels and eat in restaurants. It’s not an option.”   Today all the inmates in the county jail (nearly 800 people) will be on lock down in their cells. I plan to go cell by cell to read the Scriptures and give encouragement and hope.

Right now we are under a hurricane warning as well as a tornado watch. A civil emergency warning was issued earlier today that tropical storm force winds are beginning - we have already had wind gusts of 43 mph this morning, and hurricane force winds will come a few hours.  This afternoon our local forecaster is saying we’ll have steady winds around 60-100 mph for 6-7 hours and wind gusts of up to 140 mph. (The water temperature of the Gulf of Mexico is expected to provide fuel for the storm to gain strength this morning.)  First responders and law-enforcement officers have, as of 7:00 AM, all been pulled off the roads for their own safety.

Evacuations, and Precautions for Those Who Stay

Four of our church families live in mobile homes that will likely be totally destroyed - they have all evacuated out of their homes to safer places or storm shelters. Several of our local and snowbird families have homes that are in the worst of the storm surge zone.  In much of Collier County there were mandatory evacuations issued early yesterday because of the expected storm surge: Marco Island and everything south and west of U.S. 41...and then those evacuation zones were expanding inland. In some places officials were going door to door, telling people in some areas that if they didn’t leave, they needed to write their Social Security number in permanent marker on one arm, and their next of kin with a phone number on the other arm. Most of our church people who are staying behind have reported in letting me know where they are riding out the storm in areas well inland.

Disaster is At Our Door

This whole experience has been absolutely surreal. We’ve been told again and again for several days that we could be facing disaster, and now it is at our door.  On Friday and Saturday, if you turned off the TV everything seemed normal...except for empty grocery store shelves and the long lines of cars outside Hope Depot and at the gas stations. My own emotions are very raw as I haven’t slept well the last four nights: I’m already grieving for the great property loss that will be suffered by our friends and church members, and because I am very worried about the safety of some of my local friends from other countries who are remaining in their homes and apartments which have no hurricane shutters. I am picturing families with children as they endure many hours of deafening hurricane force winds and pounding rain. One 9-year old boy on his bike in our neighborhood told me, as I left my home yesterday, that his family was going to hide in his mother’s closet during the storm.  I have given the keys to our home to one dear Haitian family of nine whom I love very much (mother, father and seven kids), but they have yet to leave their low-rent apartment (with no hurricane shutters) and take me up on the offer for a safer place...and soon it will be too late.

If God is For Us, Who Can Be Against Us?

It is going to be a very, very long day, but I know the Lord will see us through. If God is for us, who can be against us?  He has already done the greater thing, sending his Beloved Son to die for our sins and conquer death...seeing us through this dark valley is an easy thing in the eyes of the Lord.

“If God is for us, who can be against us? He who did not spare his own Son but gave him up for us all, how will he not also with him graciously give us all things?... Who shall separate us from the love of Christ? Shall tribulation, or distress, or persecution, or famine, or nakedness, or danger, or sword? ...No, in all these things we are more than conquerors through him who loved us. For I am sure that neither death nor life, nor angels nor rulers, nor things present nor things to come, nor powers,  nor height nor depth, nor anything else in all creation, will be able to separate us from the love of God in Christ Jesus our Lord” (Romans 8:31-39)

Join us in thanking the Lord...

I hear the words of love, I gaze upon the blood,

I see the mighty sacrifice, and I have peace with God.

The clouds may go and come, and storms may sweep my sky,

This blood-sealed friendship changes not, the cross is ever nigh.