by Rev. Mark Sumpter, Regional Home Missionary for the Presbytery of the Southwest

From the March 2019 issue of New Horizons 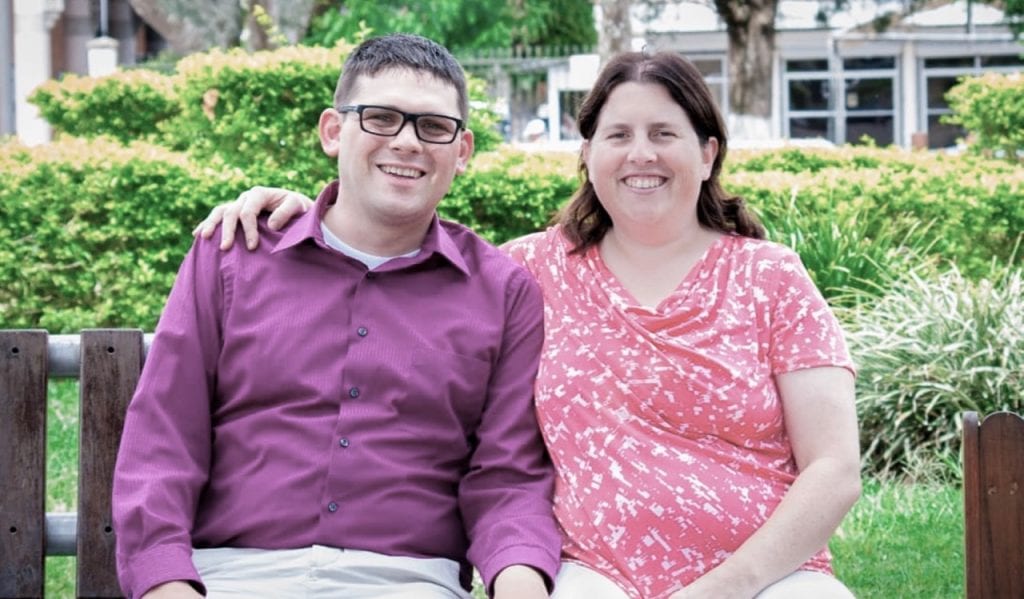 We were in a northeast Houston neighborhood called Memorial Hills, visiting with folks about their needs and circumstances, when a car pulled up. “I saw your sign, OPC Disaster Response, on the side of the truck. I wanted to stop and talk to you,” said the woman.

Dorothy and her husband, Butch, got out of the car to ask us about our ministry. After talking for some time, we handed them a “blessing bag”—a cloth bag containing Christian literature, a gift card, a pocket calendar, a gospel booklet, and church contact information.

That one conversation with Dorothy and Butch has opened many doors in this neighborhood of 275 households. It’s like a line of dominoes: one domino tips over and smacks the next one. The clatter from one to another winds from street to street. Here in Memorial Hills, a subdivision in Spring, Texas, each household leads you to the next family, and the next, and the next, and each family has a heart-grabbing story.

Hurricane Harvey crawled for two to three days over Houston back in August 2017. The fifty-two inches of rain—more than four feet—pummeled this vast metropolitan area of 6.5 million souls. People still ache from Harvey’s footprint. Houston Responds, a network of Houston churches offering aid together, writes on its website:

There remains a hidden crisis. Do you see it? An estimated 100,000 people are still displaced or living in gutted homes, lacking the resources to rebuild. Yes, 100,000. The housing disaster is also a human disaster, from which it can seem like someone is telling us, “There’s no way out.”

As surveys reveal, Harvey victims often struggle with financial challenges, medical issues, anxiety, depression and other symptoms of post-traumatic stress. As the Houston Chronicle quoted one displaced father of three, remarking about Houston’s seemingly strong recovery, “That may be for some people, but not for a lot of us.”

In this light, we remember the groan describing our Lord’s love: “He was moved with compassion for them, because they were weary and scattered, like sheep having no shepherd” (Matt. 9:36, NKJV). In 2018, the Lord began to open the door, not only to OP diaconal aid in Houston, but also to a dedicated OP evangelist who could minister through Word and prayer to this city.

Expanding into Ministry of the Word

A year ago, OPC Disaster Response Coordinator, David Nakhla, reported that he had been interacting with the Disaster Response Subcommittee of the CDM. The brothers on this committee, all of whom had firsthand experience with ministry in a disaster zone, agreed that disasters create not only incredible physical needs, but also emotional, psychological, and even spiritual ones. 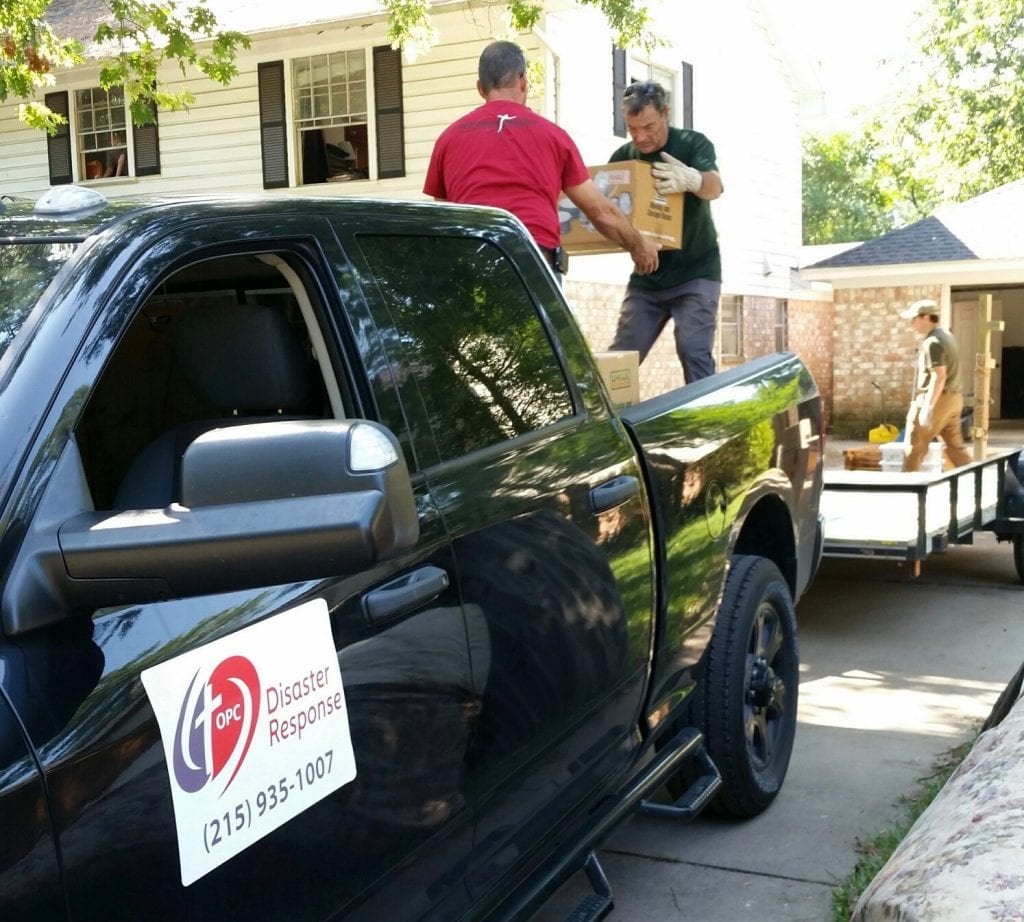 When a disaster like Harvey turns your life inside out and upside down, it’s a major life event—possibly one of the most traumatic in your lifetime. Suppose that all you own and value is piled in a heap at the curbside. You likely did not have flood insurance because, supposedly, Houston only floods once every thousand years. And, all the volunteer organizations you once saw around town have left.

The scars that the disaster left are not just the watermarks halfway up your walls, the furniture tossed around and beginning to grow mold, or your vehicle in the driveway that won’t start because its engine was sitting in water. The scars likely also go deep into the recesses of your heart and mind—Who is going to help? How will I ever put my life back together? How will this affect my children, whose safe place is gone?

One church family said that soon after Hurricane Harvey, a puddle running across the floor from a spilled glass of water created panic in all of their hearts. At that moment, they realized the depth of the trauma they had suffered as a family from the disaster.

OPC Disaster Response is a ministry of mercy. And yet, the response effort is the work of the whole church and ought not be limited to diaconal work.

The committee determined that it would be appropriate to use disaster response funds to respond to the spiritual needs of those affected. They also believed the church would be thankful to see the funds used that way, particularly if the ministry of the Word was accompanied by a ministry of deed and vice versa.

Recognizing this, the Disaster Response Subcommittee encouraged the brothers in the Presbytery of the Southwest laboring in the Houston area to consider whether they would like to call a full-time evangelist to serve for a limited time before this unique window of opportunity closed.

Within days, several men from our Home Missions Committee became informed of this suggestion, along with ministers, elders, and deacons in Houston. Weeks clicked by: a job description was proposed and a profile of a man was drafted. By late June, the men in Houston had contacted the Reverend Nick Lammé (pronounced lah-MAY). Lammé, who was serving as a minister of the Presbytery of the Midwest, had been working in Costa Rica in a Bible translation ministry. He expressed enthusiastic interest. This past September, he was approved to accept the call from the presbytery and be on the field as soon as possible.

To have a full-time evangelist on the field ministering the gospel and offering counsel and prayer in connection with disaster response ministry is a first for the Orthodox Presbyterian Church. The funding for this position comes from the Committee on Home Missions and Church Extension, the Committee on Diaconal Ministries, and the Presbytery of the Southwest.

Lammé is a gift to the church and a gifted man. Not only does he have considerable evangelistic experience, he’s also fluent in Spanish—a wonderful asset in South Texas. He and his wife, Rosie, have four children: Ester, Abigail, Alex, and Natalia. Together they serve as a gracious family in this ministry.

The area churches are looking forward to this timely help with outreach and teaching. Lammé will spearhead the ministry of the Word and prayer. He will also coordinate hospitality and other practical ways of outreach—particularly in helping the two OP churches of Houston to invite victims of Hurricane Harvey to church, so that they might worship at these congregations or others. Lammé will be on a two-year assignment to initiate outreach, evangelism, and follow-up throughout the whole metro area. That’s a huge ministry field!

He anticipates great things in Christ’s strength: “I am very encouraged to see the Lord opening doors and allowing me to make new contacts and minister the gospel to hurting people. I anticipate that as I continue to work in this [area of Memorial Hills] and other neighborhoods, the Lord will open up even more opportunities.”

The challenges in these neighborhoods are great—deep financial burdens, hopelessness about ever returning to normalcy, and lasting marital stress. Lammé is responding with encouragement and hospitality. The Homeowners Association in Memorial Hills offered a free rental of their community center, so Lammé hosted an open house. “We had around thirty people come, most of whom were new friends,” he said.

Praying with people, stopping in to visit and read Scripture, and leaving gospel-based literature has also proven effective, Lammé said. “First and foremost, we want people to know the Lord whom we know and love. He alone is our hope,” he explained.

Back in December, Nick and I were about to leave Memorial Hills after a day of visits when, out of the corner of my eye, I saw a man approaching us. “I see the sticker on your car: OPC Disaster Response,” he said. That sticker opened up a two-hour visit with Roger and Cindy. This couple is not only the victim of Harvey but the victim of broken promises from a string of contractors, church volunteers, and other professional laborers. Roger and Cindy—in their early forties with a one-and-a-half-year-old and a ten-week-old newborn—are, like so many others, faced with a mountain of grief and heartache.

After the initial conversation on the sidewalk, we drove to Roger and Cindy’s house and spent two hours listening to their story and surveying things. The house is gutted and down to the studs—floor to ceiling. And there’s mold. They had seven to eight feet of water in this ranch-style house. Devastation is here. Dire need abounds. Drained emotions fill the room.

We (for sure) made no promises to Roger and Cindy. But we prayed with them. And we did say we’d get back to them after we had gathered some information. Cindy, at one point in the conversation, could barely mouth the words, “we are in trouble.”  This is a family that has had hardship after hardship with broken promises, scams, and wicked dealings. Roger, as well, is on disability for a medical issue involving brain surgery. They presently live in 300 square feet of space in a loaner-RV.

This is the work of the church. Stirring up gifts in the body of Christ in Houston and throughout our presbytery means helping one another to see the wide-open door for compassionate service in the wake of the hurricane. Having a full-time evangelist here for Harvey households includes his role in equipping all of us to do this work.

Please pray with us for fortitude and wisdom; pray for the Spirit’s leading, for insight into the needs around us, and for faithfulness. The OPC in Houston has the opportunity to put feet to Psalm 145:14–19 (NKJV):

The Lord upholds all who fall, and raises up all who are bowed down. The eyes of all look expectantly to You, and You give them their food in due season. You open Your hand and satisfy the desire of every living thing. The Lord is righteous in all His ways, gracious in all His works. The Lord is near to all who call upon Him, to all who call upon Him in truth. He will fulfill the desire of those who fear Him; He also will hear their cry and save them. The Lord preserves all who love Him, but all the wicked He will destroy.

Please pray for the Lammés. Ask the Lord to give Nick, Rosie, and their four children, a good adjustment to Houston.

Pray also that the Lord would direct Lammé’s steps in outreach and discipleship to the families affected by Hurricane Harvey. Pray for discipleship in the Word. Pray for conversions. Pray for effective means of inviting and welcoming people in the worship of the Lord in our local OP churches.

May Jesus Christ be working through his church to manifest love, truth, and compassionate care. Thank you, OPC, for this vision of an evangelist to carry on the work of Houston Harvey ministry! 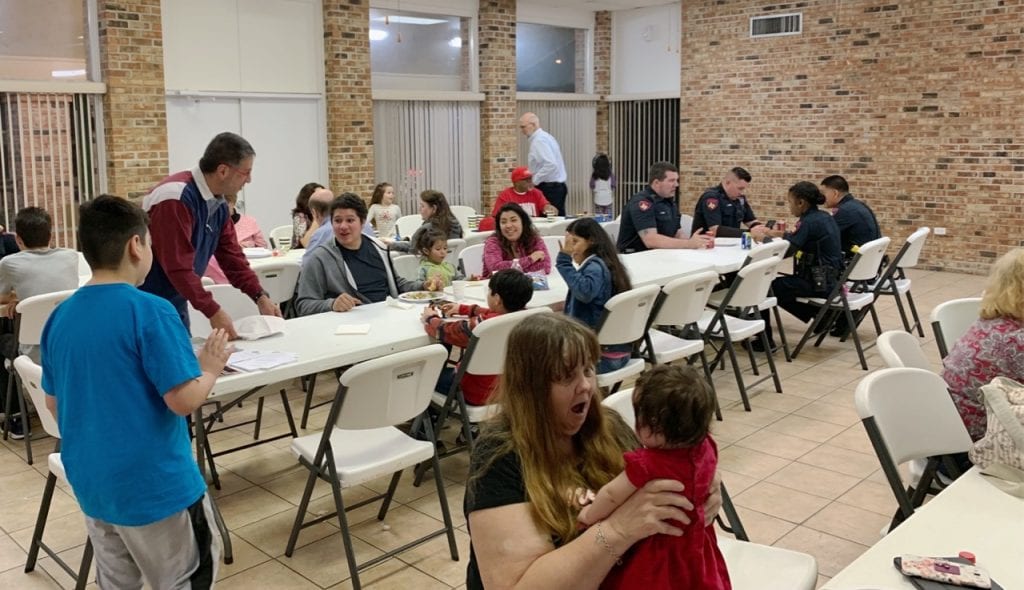 The open house for friends and neighbors in Memorial Hills