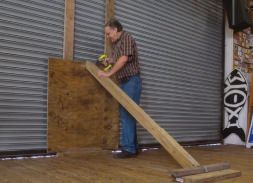 God in his providence chose to spare the three Wildwood properties of any major damage.  Although the main threat to the Boardwalk Chapel was the wind, the roof was found to be secure.  There were some missing shingles but that is a common occurrence when brisk winter winds sweep across the 17 year old roof.  Ocean waves had minimal impact due to the annual increasing width of the beach between rising tides and the Chapel.

Additionally, the Chapel is partially shielded by a sand dune built to protect the nearby Wildwood Convention Center.  The power of the storm surge was apparent in the drastic sand patterns around some of the 36 cinder block pillars holding up the Chapel.  However, each pillar is secured to a concrete slab atop a 20-30 foot long piling driven into the ground. (“... a wise man ... built his house on the rock.” Matt. 7:24),  A walk through the Chapel interior revealed no damage other than ...  (read the complete report.)