Continuing the Work Begun in Midland

Continuing the Work Begun in Midland

Cary and Judy Hirdes have been working in Midland, Michigan for the last 4+ months. Judy shares this update from their most recent trip there. 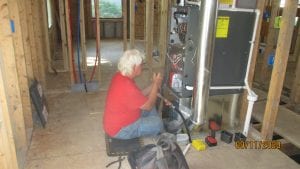 Our work in Midland, MI continues, following the devastating flood from the dam breakage on May 19. We drove there on August 4 to check out the Moots' home project for some details Cary needed to get all the parts ordered.

We returned on August 14 and again parked our fifth wheel trailer at Christ Covenant OPC.

On Friday morning, as we traveled to Midland, we came upon some sheet metal lying on the highway. We soon learned it was some of the parts being delivered to the Moots’ home for our work. It had blown off the trailer because a strap broke and a semi truck came by just then and the wind sucked it off. Those parts needed to be reordered through another supplier in the area. We unloaded the trailer with the help of others in the afternoon and began some planning. Saturday was a work day, too.

During this week we needed to run all the ductwork in the crawl space to distribute the heat and air conditioning. Again, we did not know how many volunteers we would have each day and their skill level to accomplish what needed to be done. Each day the volunteers were trained for their task and went to work accomplishing their part of the maze of sheet metal. As before, the volunteers were supplied as needed each day.

Our consistent help was from Doug Baxter (PA) and his grandson Leif who were familiar with ductwork and spent many hours in the crawl space.

I stayed busy most of the time supplying tools and parts to those in the crawl space. There was also need for fans and lights to help the volunteers. She also cleaned up after the workers. This time we also had the brick that was removed for the slider doors which she worked on to remove the excess mortar so the brick can be reused.

By Friday afternoon (the 21st) everything was done that we had planned for the week so we returned home on Saturday, August 22.

We were surprised by Pastor Sarafolean and Rhonda, Glenn & Michelle Moots and Tom & Linda Kennedy with dinner for our 50th anniversary, which was August 26.

On September 10 and 11 we returned to finish a few more things. Cary was able to finish connecting the air conditioner and put exhaust vents through the roof in several places.

The church’s hospitality was great in supplying breakfast foods and dinner each night.