From the December 2011 issue of New Horizons 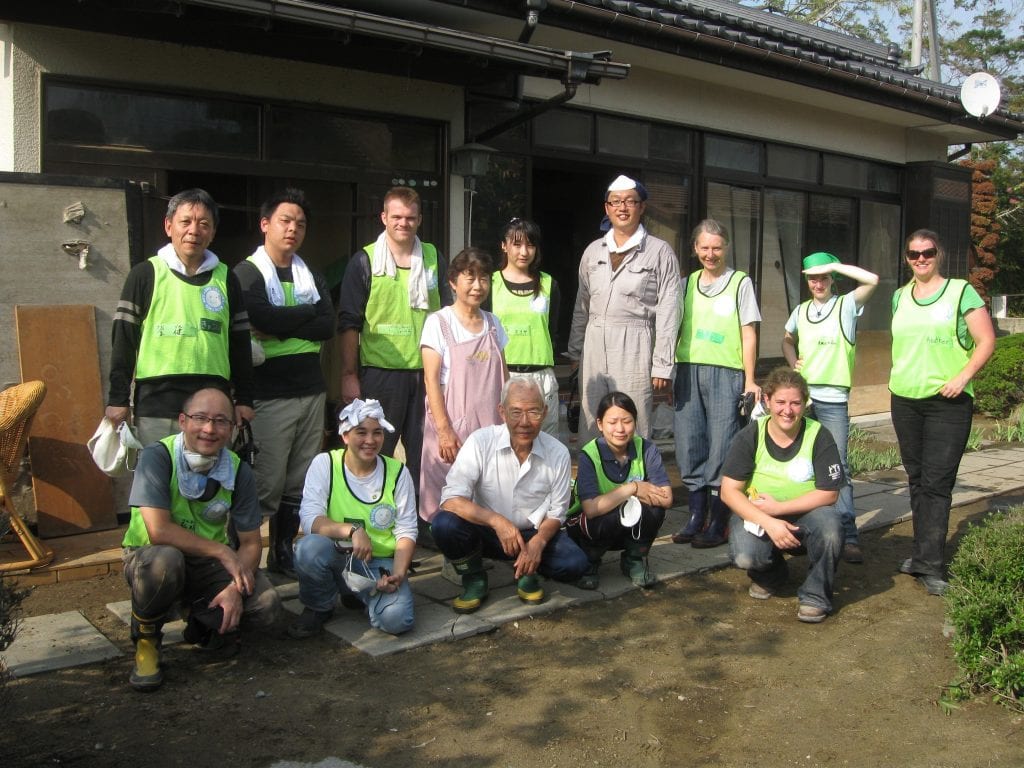 Teamwork in Japan following the Tsunami of March 2011

For a Christian visiting Japan’s capital city of Tokyo, one of the most heartbreaking sights is also one of the city’s biggest attractions. The famous Sensoji Temple draws some thirty million visitors each year, including throngs of Buddhists futilely worshipping Kannon—the purported “goddess of mercy.”

On a hot afternoon near the end of summer, dozens of Japanese visitors surrounded a large fountain near the temple’s entrance, waiting to cleanse themselves for worship by ladling water onto their hands and mouths. For children too small to reach the fountain, parents lowered the ladles over their tiny, outstretched hands. Nearby, other worshipers leaned over a smoldering pot of heavily perfumed incense, seeking to rid themselves of misfortune before entering the temple.

Visitors then ascended the temple’s wide steps and entered through a row of deep, red columns. From outside the vast entrance, one could hear the sad sounds of empty worship: a constant thudding of coins tossed into a giant wooden box as worshipers sought the favor of the gods.

The sights, sounds, and smells of worship at Sensoji—a reality repeated in scores of temples and households all over Japan are reminiscent of the apostle Paul’s visit to Athens in Acts 17:16: “His spirit was provoked within him as he saw that the city was full of idols.”

But Japan, a nation full of idols, has been shaken by her Creator. The 9.0-magnitude earthquake and catastrophic tsunami that struck northeastern Japan on March 11 brought stunning reminders of the prophet Nahum’s words: “The mountains quake before him; the hills melt; the earth heaves before him, the world and all who dwell in it” (Nah. 1:5).

For Orthodox Presbyterian missionaries laboring in the heart of the tsunami’s overwhelming devastation, the calamity has also brought fresh opportunities to proclaim the good news that Nahum later declares: “The Lord is good, a stronghold in the day of trouble; he knows those who take refuge in him” (1:7).

Earlier this year, three teams of short-term volunteers from OP congregations across the U.S. traveled to Japan to support the OP missionaries’ long-term work of proclaiming the gospel of Christ in Japan’s dark day of trouble.

Each team worked for two weeks, focusing relief efforts on gutting a tsunami-stricken building that missionaries hope to use as a relief and outreach center in Yamamoto-cho—a town with no churches. Over the next three years, missionaries and Japanese pastors aim to develop local contacts with the hope of planting the town’s first church in decades. 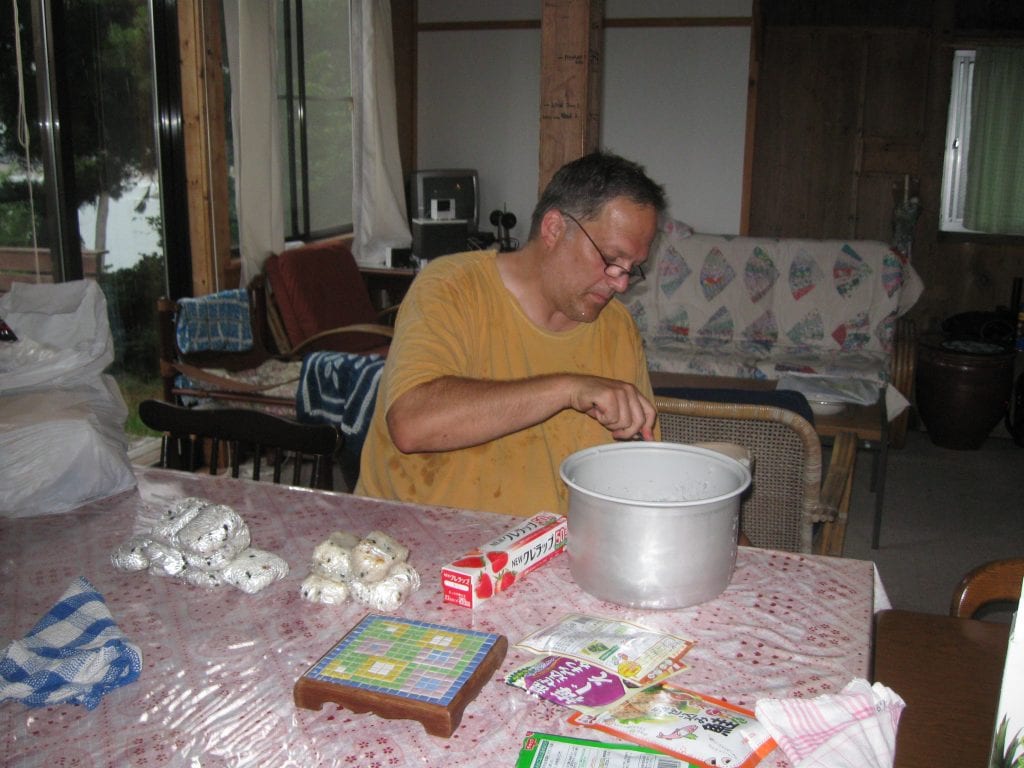 While much prayer and hard work lie ahead, Pastor Hiyashi, a minister in a Reformed Church of Japan (RCJ) congregation in a neighboring town, expressed great hopes as he stood in the gutted building at the end of a long workday in August: “I think we are going to be able to plant a victorious church of Jesus Christ.”

The OPC first began working to plant churches in Japan in 1938, the year that the Committee on Foreign Missions was founded. The hostilities of World War II forced OP missionaries to return to the U.S. in 1941, but the mission reopened in 1951 and began assisting the work of the newly formed RCJ. (For an excellent account of OPC history, including foreign missions, see Fighting the Good Fight, by D. G. Hart and John Muether.) The work has continued for the last sixty years, and current OP missionary Cal Cummings has labored in the country for more than half of that time. Pastor Cummings and his wife, Edie, work in Sendai, a city of one million people nearly 230 miles north of Tokyo.

Although Tokyo, with its population of 32 million, is the largest city in the world, the OP base in Sendai proved strategic in ways that couldn't have been anticipated. When the great earthquake struck off the coast of northeastern Japan in March, triggering a colossal tsunami, Sendai was the nearest major city.

Thankfully, the Lord spared our missionaries in the area—the Cummingses, the Uomotos, and the Yaegashis—from injury and major damage to their homes. Many others suffered severely: the tsunami swept away whole towns, leaving 18,000 people missing or dead, and nearly 500,000 displaced from their homes due to tsunami damage or evacuation from the area around the damaged Fukushima nuclear power plant.

Nearly seventy miles south of Tokyo, OP missionary Woody Lauer sprang into action. Pastor Lauer, his wife, Laurie, and two other family members began trucking essential supplies to the tsunami-ravaged area. Pastor Hiyashi says the Lauers brought some of the first supplies to his town of Watari. Meanwhile, Luke Cummings, the son of Pastor and Mrs. Cummings, began transporting supplies from Tokyo to his parents’ home in Sendai. Within forty-eight hours, the OPC Japan Mission had become a small relief operation serving the devastated and grief-stricken region.

During the same week, donations from OP congregations and members began pouring into denominational headquarters in Pennsylvania. By the end of the summer, the OPC Japan Relief Fund had received nearly $480,000. David Nakhla, the Short-Term Missions and Disaster Response Coordinator, worked with the Japan missionaries to send funds for needed supplies, and to begin responding to longer-term needs, including plans to establish a relief center in one of the hardest-hit areas.

Those plans began gelling over the summer as the RCJ, the OPC, and two other Reformed denominations learned of a possible site for a relief center in Yamamoto-cho, a tsunami-stricken town some forty-five miles south of Sendai. A local dentist indicated he wouldn’t return to his spacious clinic after the building endured six feet of flooding and the neighborhood suffered major water damage. The OPC and the other mission agencies began exploring the possibility of buying the property, and finalized the purchase in mid-September. 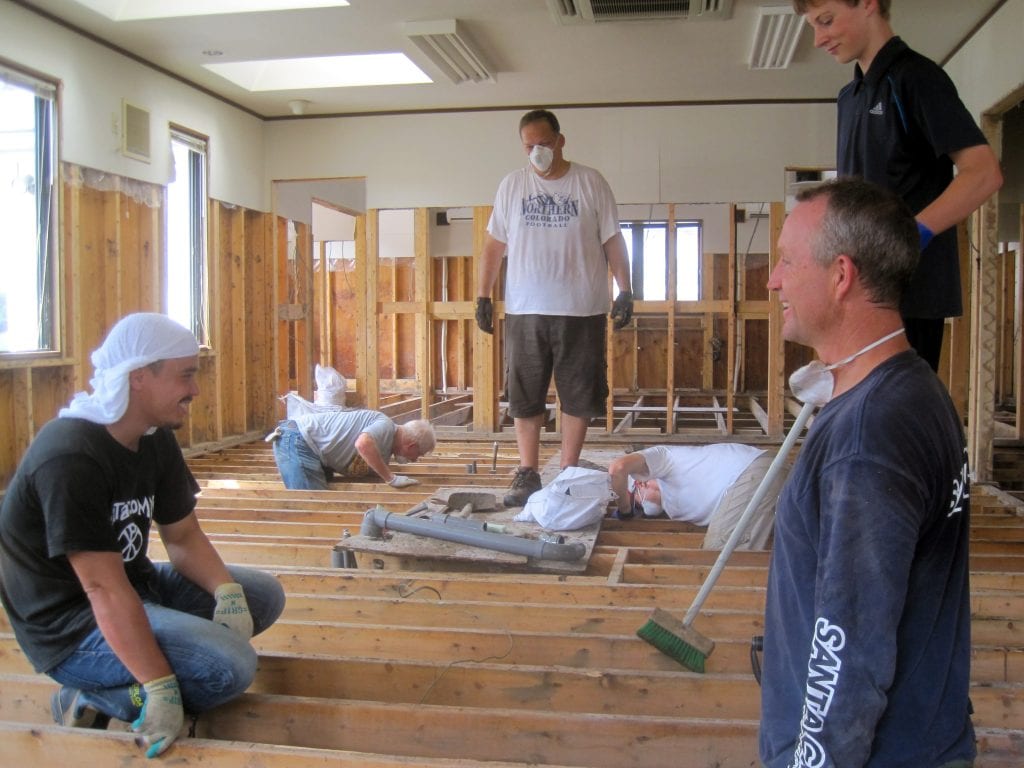 Working on the inside of the planned relief center

By mid-August, the short-term OP volunteer teams had begun arriving to empty the building and gut the damaged walls and floors. (The Japan Relief Fund paid for half of the teams’ travel costs.) The work was challenging. Because of the heavy water damage and radiation concerns, the dentist left nearly everything behind. That meant emptying a fully stocked dental clinic of all its equipment and supplies, including tables, cabinets, patients’ records, boxes of false teeth, jars of anesthesia, teeth molds, rubber gloves, picks, plaster, and heavy, sludge-covered dental chairs still bolted into the floors.

It also meant tearing out drywall and discarding it according to strict Japanese rules. Team members broke the drywall into small pieces that fit into the required 23-inch bags for disposal. (The dry wall and insulation filled nearly 300 bags.) Final steps included removing heavy metal sheeting from an X-ray room, tearing out wooden floors with crowbars, and shoveling out layers of sludge from beneath the floorboards.

After a thorough inspection, OP deacon and builder John Voss assessed the building as structurally sound and drafted plans for its renovation. The OPC began making plans for the next wave of volunteers, calling for skilled workers to complete the construction project.

During the summer trips, team members working under the direction of Cal Cummings also assisted with relief projects in the hard-hit port city of Ishinomaki, helping both the Presbyterian Church in America (PCA) and Samaritan’s Purse (a Christian relief organization). Projects included food distribution and gutting homes. (Mission to the World, the PCA’s mission agency, hopes to plant a church in this region that has few congregations.)

OP teams also worked with Pastor Akira Tateishi of the RCJ to clear homes in the town of Higashi Matsushima. The young pastor has led efforts to work on at least eighty damaged homes in the area since the tsunami hit. In a rural region where many young people leave for bigger cities like Tokyo, Tateishi says he wants to stay, and that he sees the hardships as an opportunity for outreach. “My prayer is that people here will come to know Jesus,” he said during our visit. “I want to have a relationship with the people here. I want to stay here for the rest of my life.”

Back in Yamamoto-cho, Pastor Cummings said building relationships is key to effective gospel ministry in Japan. In a reserved and self-reliant culture, sometimes that work takes years. He said, “You’re always supposed to give the impression that all is well.”

Now that giving that impression is nearly impossible for many living in tsunami-stricken zones, Cummings is thankful for new opportunities to share the grace of Christ by offering practical help to people in desperate need: “People are saying, ‘I can’t believe it, but thank you.’” The missionary says that short-term efforts focused on the ministry of deed help serve the longer-term efforts of the ministry of the Word. 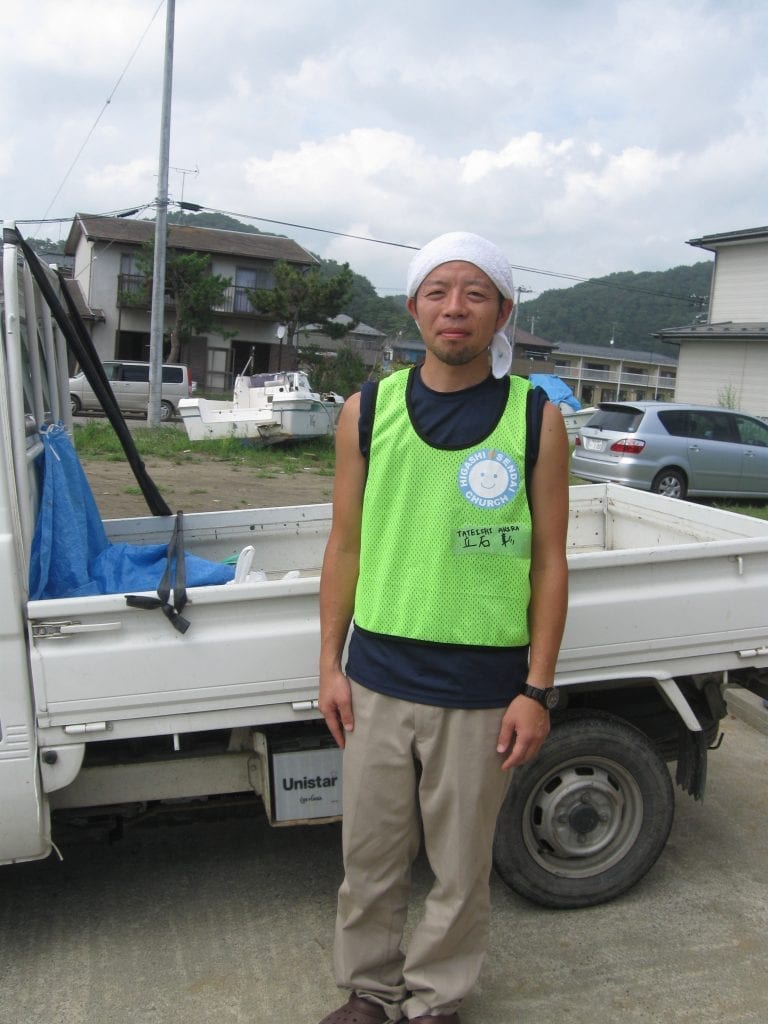 Although Japan is a highly developed nation, help from outside groups like the OPC has been vital. The notion of volunteerism is scant in many parts of Japan, and many residents in the stricken northeastern region are particularly needy. The area, known as Tohoku, has one of the highest populations of elderly people in the nation, and Japan has the most rapidly aging population in the world. That makes heavy, manual labor difficult for many with severely damaged homes. After one of the short-term teams helped a childless and elderly couple associated with Pastor Tateishi’s relief work this summer, the husband told the group: “I never thought anyone would help me like this.”

The need for spiritual help is acute in a country where less than 2 percent of the population professes Christianity. Heartbreaking expressions of empty hope abound at many shrines and memorials for the dead. One street over from the dental clinic in Yamamoto-cho, a small table with Buddhist offerings sat outside a kindergarten building where three children died in the tsunami. The makeshift shrine included toy cars, boxes of juice, crayons, candles, fresh flowers, and a picture of two of the children who died. A handwritten note on the frame said, “Remember to pray for us.”

That kind of hopelessness pervaded Japan long before the tsunami. Cummings notes that the country has one of the highest suicide rates in the world. The number hit a two-year high in May, with 3,000 suicides per month. “Going back to normal in Japan is going back to disaster,” he says. “It’s a spiritual disaster. We need a tsunami of God’s grace.”

During a Sunday morning service this summer at Eiko Church, an RCJ congregation in Sendai, a visiting pastor prayed for that kind of flood of God’s grace after reading from Jonah: “The waters closed in over me to take my life; the deep surrounded me.… When my life was fainting away, I remembered the Lord, and my prayer came to you, into your holy temple” (Jonah 2:5, 7). Reflecting on the tsunami, the pastor assured the congregation: “Since Jesus bore our sins on the cross, he will also bear our sorrows for us.”

Team members agreed that one of the highlights of their trips was worshiping with Japanese believers at churches in Sendai. On a rainy Sunday afternoon, after a delightful barbecue lunch prepared by members of an RCJ church that meets in a one-hundred-year-old building, the American team members joined Japanese saints in praying and singing hymns.

OP volunteers plan to fix the large cracks and holes in the church’s quake-damaged walls, but the damage on that Sunday afternoon didn’t dampen praise. The sounds of English and Japanese tongues filled the church as they sang together: “On Christ the solid rock I stand, all other ground is sinking sand, all other ground is sinking sand.” Team leader Mike Gilbert, an elder at Christ Covenant OPC in Sheridan, Indiana, reflected: “It was for many of us on the team, a small picture of what will take place in heaven.”