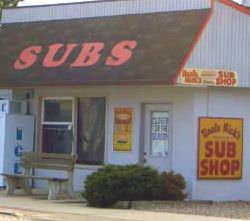 “This one seemed to hit close to home,” she said, referring to Super Storm Sandy. Members in her extended family had been impacted by the hurricane. But as a small business owner herself, Stephanie wanted to reach out to Shore businesses affected by Sandy.

Uncle Nick’s is open year-round, so the shop was fully stocked when Sandy hit. The building and refrigeration system sustained massive water damage. A lot of inventory was lost as well.

(As of this writing, Dave and his partner are still waiting for an insurance adjustor to come out and assess the “loss of product.”)

Through two of her children who worked there, Stephanie had a connection with Conshohocken Café in Conshohocken, Pennsylvania. Stephanie’s business, ReNu Consulting Health Coaching, and the café hosted the fund-raiser February 27, 2013.  Local businesses helped sponsor the event described as a health-focused dinner and raffle.

Stephanie is still taking donations and hopes to raise $1,000.

What are Stephanie’s hopes for the event?

“Our hope is really two things. First, we definitely planted gospel seeds, and we hope to have continued relationships with those we met. Second, we are being salt and light. We’re saying as Christians, ‘We’re here, we do care, and we are doing something about it.”