From the May 2013 issue of New Horizons 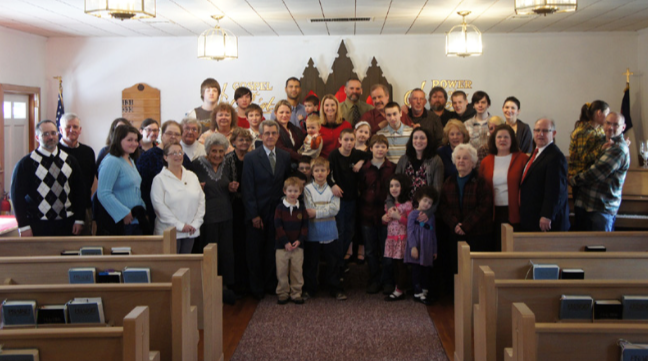 The congregation of Faith OPC

Much has been written and shared about the tragedy that resulted from “Superstorm Sandy” hitting the communities of coastal New Jersey, New York City, Long Island, and Connecticut on October 29, 2012. While a record number of homes and businesses were without power for a record number of days, the major impact was caused by the record tidal surge, coupled with sustained high winds, which caused major damage and loss to personal and business properties, as well as utility infrastructure. The estimated replacement costs also set new records.

However, within the context of these recent tragic events, God was working in a mysterious way in the life of an Orthodox Presbyterian church hit by the storm. Until late October, Redeemer OPC was meeting in a rented church building in the summer resort town of Seaside Heights, New Jersey, on one of the barrier islands. Redeemer completed four years as an OP home missions work before being organized as a separate congregation in 2000, when Geoffrey Willour was installed as their pastor. After years of steady numerical and spiritual growth, the congregation began to struggle as mature families and ordained men left because of job transfers and retirements. Their meeting place just before the storm was their third rental property. With that building up for sale, and the congregation unable to purchase it, there was uncertainty about the future.

In early 2012, Rev. Willour developed a relationship with Ron Pritts, an Associate Reformed Presbyterian Church minister who was serving as the pastor of Faith Bible Presbyterian Church (Independent) in nearby Brick, New Jersey. After spending an initial three years in the Bible Presbyterian Church, Faith Bible Church declared itself independent in 1957. The congregation owns two properties, on which are the church building and a manse. The two men saw the wisdom in a merger of the two congregations for separate yet complementary reasons. Rev. Pritts was close to retirement, his church of twenty communicant members was mostly elderly, and he felt that they needed to come under the oversight of a presbytery. Rev. Willour saw the need for the stability of church building ownership in a year-round neighborhood. Also, Redeemer OPC’s thirty-eight communicant members (plus about sixteen noncommunicants) complemented the membership of the older Faith Bible congregation.

Before Rev. Willour could follow through on these plans, he accepted a call to a pulpit near Cleveland, Ohio, in June 2012. The Presbytery of New Jersey assigned Jim Zozzaro as ministerial advisor, and the congregation approved ruling elder John Hauser to serve on the augmented session. Both men came from Calvary OPC in Wildwood, New Jersey, and they were now the entire session, since the last ordained man at Redeemer had recently retired.

Throughout the summer and into October, the attempts to bring the two congregations together were largely unsuccessful. Then “the storm” came, bringing havoc to towns like Seaside Heights. Redeemer’s rental building experienced significant damage from the intrusion of salt water. The facility would not be usable without major repairs. Six of the families from the congregation were displaced from their homes. To date, five of those families continue to live in temporary housing or with extended family members, and face an uncertain future. In addition, two families from the Faith Bible congregation continue to be displaced from their homes.

Within a week of the storm, Rev. Pritts received an inquiry from someone from Redeemer asking, “Is your church open?” He replied, “Yes, it is open with no major damage, but we have no electricity.” The power to the church was restored within a week, well before many along the New Jersey coast—thanks to the work of an Alabama-based power company. Rev. Pritts recalled that, at the height of the storm, the ground around the church building, just a few miles off the island on the mainland, was flooded with about one foot of water. Since the first floor of the building sits on a foundation about two feet above the ground, the building was usable!

With power restored, Faith Bible invited the Redeemer congregation to join them for worship. The response was wonderful! For the first time, the majority of both congregations met together for worship. In the months that followed, it became obvious to Redeemer that their Seaside Heights building would not be usable for the foreseeable future. In the meantime, God blessed their fellowship in so many ways that they began planning to merge the two congregations into one.

One man from Redeemer (and perhaps others who were driven from their homes by the storm) was impressed by the effectiveness of the relief volunteers from the OPC and other denominations. To him it demonstrated just one of the many practical values of belonging to a denominational body. (See the report in New Horizons, January 2013.)

Since the independent Faith Bible congregation was seeking to be affiliated with a Reformed denomination, they basically said to Redeemer OPC, “Come and take over our church and we’ll worship with you,” according to Rev. Pritts. He added, “That was not an easy thing to do.” The new congregation decided that the merged church would be known corporately as Faith Bible Church – Orthodox Presbyterian.

With the revised incorporation documents essentially complete, the first official worship service of the unified congregation was held on February 24, 2013. Rev. Pritts, acting as “supply pastor,” led the service and emphasized its significance in the life of this local church. Rev. Zozzaro asked the communicant members of Redeemer Church and Faith Bible Church to stand and respond in unison to the membership questions. Rev. Zozzaro’s sermon, entitled “What Is an Orthodox Presbyterian Church?” was based on Hebrews 13:7–17. A time of refreshment and fellowship followed the service. Many of the elderly members from Faith Bible expressed the joy and blessing of seeing and hearing so many people of all ages, including young people and children, worshipping together.

While the newly constituted congregation anticipates a wonderful ministry in Christ’s visible church, the months ahead present many challenges for them. They need to call a pastor and identify men who can serve as ruling elders and deacons. Today, if you drive through the coastal New Jersey communities, especially north of Atlantic City, as Rev Zozzaro stated, “You see all the heartbreak, the tragedy, not the good things.” The recovery is still in its early stages. Massive amounts of debris are being removed. The start of major repair and reconstruction waits on the bureaucracy of recovery logistics, town hall meetings, insurance claims, FEMA forms, and interpretation of changing building codes. Volunteer work groups from churches, scheduled to come over the next few months, are really needed. However, in all of this, God’s sovereign hand is at work for the good of his people, to build his church, and for his glory!