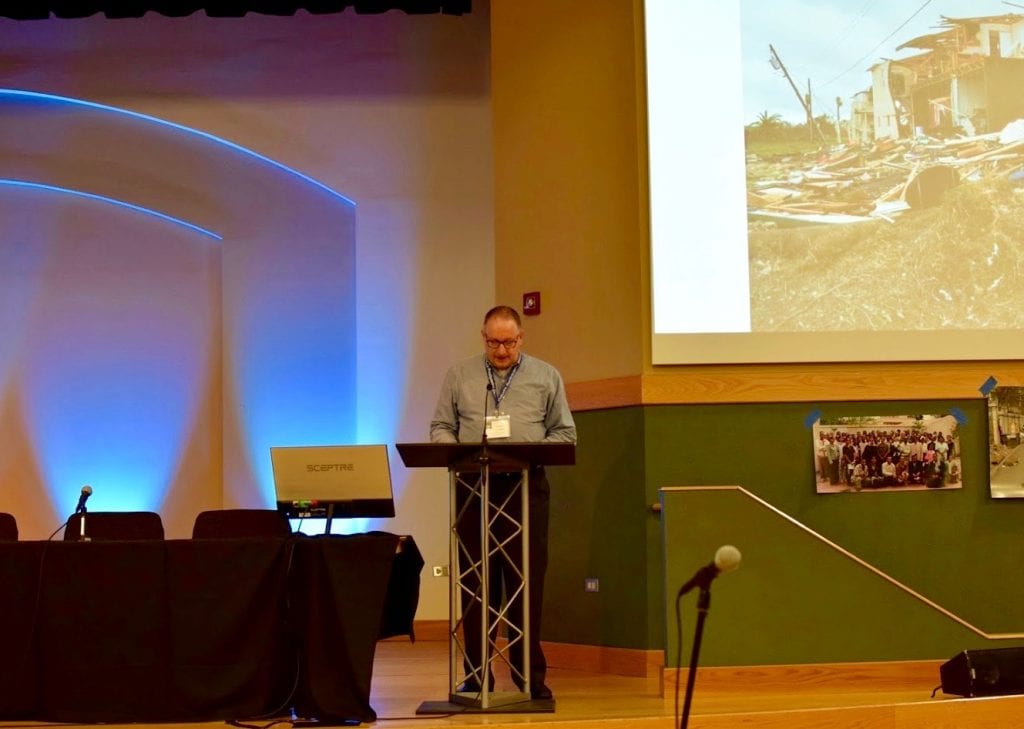 I’d like to thank the Committee on Diaconal Ministries for inviting me to speak to you for the next 10 minutes about the OPC Hurricane Harvey disaster response ministry in Houston.

Hurricane Harvey first made landfall in Texas on August 25th, 2017 as a category 4 hurricane with max sustained winds of 130 mph, and the town of Rockport was virtually leveled.  After moving inland the storm stalled and slowly drifted back into the Gulf of Mexico, making a second landfall near Cameron, LA on August 29 as a major tropical storm.

103 people died in Texas - 68 were from the direct effects of the hurricane, and 35 from indirect effects in the storm's aftermath.

Hurricane Harvey is tied with Hurricane Katrina as the costliest tropical cyclone on record in the United States, currently estimated at $125 billion.

In the Houston metro area, the greatest damage was from flooding, due to catastrophic rainfall amounts from the very slow moving storm.  Hurricane Harvey remained partially over land and partially over the Gulf of Mexico for several days, which fed the tremendous rain that fell along the Texas and Louisiana coastlines.  With its counter-clockwise rotation, the storm siphoned literally trillions of gallons of water out of the Gulf and dumped it on land like a huge garden hose.

Harvey was also the wettest tropical cyclone on record in the United States, with a maximum recorded rainfall of 60 inches near Beaumont.  50 inches and more of rain was common throughout the Houston metro area.  More rain fell on Houston in a week than the average annual rainfall which is 49.8 inches.

In Pearland, a suburb south of Houston, the rainfall accumulation was 9.92" in 90 minutes at one point, to give you an idea of how hard it rained at times.

Flooding inundated hundreds of thousands of homes, displaced more than 30,000 people, and prompted more than 17,000 rescues in Texas.

An estimated 25–30 percent of Harris County—roughly 444 sq. miles of land—was submerged.  Harris County is the most populous County in Texas, and this is not to mention the surrounding counties that make up the Houston metro area with a total population of nearly over 6.5 million people.  Many of the suburban communities and neighborhoods surrounding Houston, especially along rivers and bayous were engulfed in 2 to 10 feet of water.

Some estimates have 300,000 structures, 500,000 vehicles and 700 businesses damaged or destroyed.  It’s definitely an all-time record for vehicle loss due to a single event!

The Texas DPS says over 270,000 homes were damaged during the storm and 15,500 were destroyed.  In Harris County alone over 113,000 homes were damaged and 835 destroyed.  These stats are from September of last year and the final totals may be higher.  In fact, no one exactly knows – it depends on which agency is talking.  There were close to 650,000 requests filed in Texas for federal disaster assistance.

Once the storm was over, the OPC immediately got to work.

Local diaconates at Cornerstone and Providence OPC worked together with David Nakhla and the CDM to mobilize resources and volunteer workers to come to Houston.  Volunteers started showing up from all over the country who didn’t have to be asked.  Materials and supplies were being donated and brought in.  The response was truly overwhelming!

We had to get organized quickly, and a temporary Operating Committee was established consisting of:

We needed site coordinators to direct and supervise the work “on the ground”.  We also needed a Volunteer Coordinator and a Hospitality Coordinator.  We quickly found that there are a whole bunch of administrative and logistical challenges that must be dealt with to sustain a disaster response effort.

God is good and he provided.  The role of site coordinator has been very ably filled over the last 9 months by 3 different men. Our Volunteer Coordinator from the beginning has been Peggy Sumpter, who has done a ton of work behind the scenes lining up volunteers.  The hospitality coordinator role was handled first by Mark Sumpter and then by Gloria Davis, whose husband Jeff is one of the 3 volunteer site coordinators we have been blessed with.  We owe a genuine debt of gratitude to all of these people for the enormous amount of work they’ve done and are still doing.

In the OPC offices, Janet Birkmann supports this ministry with continuous news coverage through S.T.O.R.M. reports and we’ve had coverage in New Horizons.  Of course David is our lifeline with the CDM, and without him and his vision for the OPC’s disaster response ministry I doubt that I would be here talking about what’s been going on in Houston for ¾ of a year.

We’ve helped 2 churches, one OPC, which is Cornerstone, and one non-OP church, a Vietnamese CMA church pastored “out of bounds” by Rev. Kim Dang, an ordained OP pastor.  Both of these churches experienced the effects of Hurricane Harvey on their properties.

In fact, the Vietnamese church has been serving as the base of operations and housing for several teams of volunteers.

There have been 216 volunteers:

Today as I speak we have a group of 37 young people from Dutton URC in Caledonia, MI hard at work.  Next week we have one volunteer, an OPC pastor (Ken Montgomery, Geneva OPC in Woodstock, GA), so if you know anyone in your churches who is looking for something to do next week, please send them down to Houston!

The Temporary Operating Committee recently agreed to take a three-month summer hiatus – in July/August/September.  This will give the committee an opportunity to pause, take stock of where we’ve been and what we’ve already accomplished, assess the ongoing need, plan out the next phase and begin making preparations for the work to resume on October 1st.

Many organizations both religious and secular were in Houston in the first few months after the storm to help with demolition and clean-up.  That is a monumental task, and it’s hard, hot and sweaty work.  Gradually many of these groups have wrapped up their operations and moved on.

Do you know that the OPC is one of the only Christian organizations left in Houston that’s helping people to rebuild?  There are really 2 phases after a hurricane – the first is demolition and clean-up, and the 2nd is reconstruction.  Everybody shows up for demolition and clean-up.  Not everybody sticks around for reconstruction.  Reconstruction can last for months and months and months, and it takes real sticking power to persevere to the end of this phase.

Though it’s now going on a year after Harvey struck Texas, and the 2018 Atlantic hurricane season officially started on June 1st, the effects of Harvey still linger in Texas with hundreds if not thousands of families remaining in need of help.

I think of Hurricane Harvey as a calling card from God to the people of Texas.  Both to the unchurched, non-Christian population, and equally if not more so to the church.  The effects of this storm were felt by both.

It got people’s attention and it forced them to ask the question; “WHY?”  And, it was a wake-up call to the church, to get out of the pews and into the community.

This opportunity that God has presented us for ministry to people in great need has dovetailed well with the work of RHM Mark Sumpter.  Doors have opened to families and households that may not have been opened as easily and naturally had there not been a crisis brought on by natural disaster.

Our prayer is that through the outreach ministry of disaster relief AND recovery, we in the OPC can help people find an enduring answer to the question of “why?”  It will be manifested by the physical and material assistance we provide in the name of Christ, and by the testimony of the gospel that we proclaim to people as we have opportunity.

Continuing and sustaining our ministry of disaster relief and recovery in Houston will require more investments of time, human capital, and financial capital.  We covet your prayers that God will continue to supply the need and help us to complete the work that he has called us all to.