Hurricane Florence Response: A Witness of the Love of Christ

Hurricane Florence Response: A Witness of the Love of Christ 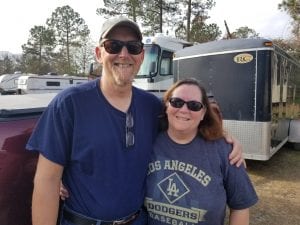 It has been a wonderful experience to do this work and I am grateful for the opportunity to be a part of this important ministry of the OPC.

My wife Brenda and I arrived in New Bern, North Carolina, on October 20, 2018, where I took up my post as the Site Coordinator for OPC Disaster Response work following Hurricane Florence.

The damage to most properties in North Carolina was from severe flooding. Parts of Carteret County got over 34 inches of rain. Many rivers severely overflowed their banks, bringing large amounts of debris far onto the land, and intense rainfall overwhelmed the city drainage systems.

Volunteers came to assist us for 15 weeks of the eight months that Brenda and I served. Though the work was primarily construction-related and a ministry of deed, there were also opportunities to minister the Word. Volunteers and I had several conversations with non-believers or non-practicing believers. We spoke with the families of church members, neighbors of those we were helping, and even the mechanic at the rental yard we did business with. We directly ministered to an atheist homeowner though we never met him, helped a woman attending a Mormon church, and a woman who had strange ideas about the Bible. Many people came to know what we were doing and with what church, even if we didn’t talk about our faith with them. This, too, was a witness of the love of Christ. At least twice, non-believing volunteers served with their Christian friends and were witnessed to while here.

Covenant OPC in New Bern was a wonderful church to work with and could serve as a model of proper hospitality. I know the hospitality coordinator had her challenges, but from my perspective the church members really stepped up. Volunteers were housed at individual homes as well as at the church building. Volunteers housed at the church building received a meal just about every night they stayed there, unless they wanted to do something else. Volunteers were always approached and engaged in conversation when they attended the church. They were also acknowledged and thanked from the pulpit. Overall, they were very much welcomed.

The volunteer and hospitality coordinators, Maribeth and Sheila, went above and beyond!  They treated their roles as highly important ministries in and of themselves, which made my job that much easier.

Significantly, local church member Jim Flanagan shared his expertise on mold and mold mitigation. In the future, it would be wise for OPC Disaster Response to use what was learned about mold remediation when responding to flood disasters.

Nineteen homes and one business from three OPC churches were helped: