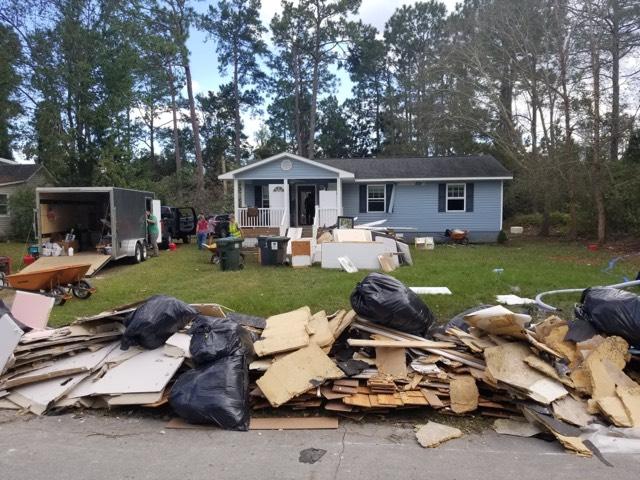 Flooded home of an OPC member in North Carolina

The much-forecasted arrival of Hurricane Florence finally occurred on September 14, 2018, in Wrightsville Beach, NC, as a Category 1 hurricane. Florence caused a storm surge of as much as ten feet above sea level in New Bern, NC, causing the Neuse River to overflow its banks and sweep into this historic town. Wilmington, NC, experienced a record-breaking storm tide at 3.6 feet above high tide on that same day. Florence was a slow-moving storm and proceeded to dump up to thirty-five inches of rain on the entire state of North Carolina and most of South Carolina, much of that water then flowing back toward the ocean and causing the already burgeoning waterways to crest many days after Florence had moved on. Due to such flooding, the city of Wilmington was cut off from the rest of the state for almost a week.

As has been stated in recent reports, the CDM has been encouraging presbyteries to take on more ownership of disaster preparedness and response efforts. Thankfully, the Presbytery of the Southeast (PSE) has taken that encouragement and is now one of the best prepared presbyteries in the OPC. Their presbytery diaconal committee was able to build on the foundation of disaster preparedness previously laid in the presbytery. (Each church has a disaster response coordinator identified, and a system in place to keep track of its members before, during, and after a cataclysmic event). As such, under the able leadership of Mike Cloy (elder, Reformation OPC, Gastonia, NC) and Tim Hopper (deacon, Shiloh OPC, Raleigh, NC), contact was made with all the churches of the presbytery days before Florence even struck, an accounting of all members was completed (i.e., which families left and which were sheltering in place), and contingency plans were established.

A team of seven (five brothers and two other men) from four states arrived in North Carolina before the storm hit, equipped with emergency rations and equipment. They staged their gear in a warehouse in Wilmington, NC, and then assisted in checking on affected OPC families before the storm. This disaster response team (“DRT,” as they affectionately became known), was able to accomplish much work in the name of Christ. This was a new stage of disaster response work for the OPC for which we give thanks, and from which we can learn how we might mimic such proactiveness in future disasters.

Tim Hopper prepared an excellent overview of this process in an article entitled, Ready for the Storm, published in the December 2018 issue of New Horizons. Tim concluded:

“The development of a response plan by the disaster response team and diaconal committee of the PSE, in conjunction with information from local church officers, allowed us to ensure that each of our church members was accounted for and property damages were assessed once the storm hit. We estimate that the work done by the disaster response team saved recipients over $100,000 in tree cutting, driveway and road clearing, tarping, pumping water, and demolition of flooded properties.”

Covenant OPC (New Bern, NC), and Trinity Reformed OPC and Heritage OPC (Wilmington, NC), all had families who suffered flooding and downed trees. For some, the flood waters entered their homes, requiring the costly process of opening walls and floors to kill the mold, clean, and dry out. Since the coastline of North Carolina has such a naturally humid environment, the process of drying out saturated homes was not an easy one. Thankfully, for many church members, the water level did not rise high enough to enter into their homes, but it did flow under their homes, getting trapped in the crawl space, depositing contaminants and creating a moist environment ripe for the spread of mold and other biological hazards. As such, much of the disaster response effort has been engaged in the effort to dry homes with the use of commercial dehumidifiers, purchased mostly with the use of a $10,000 gift donated to OPC Disaster Response for the express purpose of purchasing equipment. These efforts benefited very much from the expertise of Jim Flanagan (Covenant, New Bern), who providentially has decades of experience in disaster recovery work.

“Thank you so much for your hard work and dedication. You were a great witness for Christ everywhere you went.”

“Thank you so much for helping C. get this work done on her house - you have indeed been the hands and feet of Jesus to her.”

“Thank you so much for checking on our home. We are resting easier now knowing what's going on and what to expect when we come back. Praying for your safety.”

“Love that the OPC is there caring for its people in time of need!”

On September 22—28, 2018, the OPC Disaster Response Coordinator performed an initial assessment, visiting the affected churches, their officers, and as many affected families as possible. He quickly discovered how far apart the families of these churches live. In his six days on the ground, he was able to visit about fifteen homes, churches, or places of business of OPC members, but drove over 900 miles to do so. Distance has certainly proved to be just one of the complexities of the Florence disaster response efforts.

In preparation for welcoming volunteers, Maribeth Campbell (Matthews OPC, Matthews, NC), agreed to serve as the volunteer coordinator for Florence disaster response efforts. Each affected church in the area identified a hospitality coordinator to assist in providing food and lodging for volunteers: Sheila Theune (Covenant, New Bern), Alaine Hofland (Trinity, Wilmington), and Ellis Furst (Heritage, Wilmington). The ministry efforts in North Carolina have been blessed by receiving eighty-one volunteers from fourteen states in 2018. The names of the volunteers who generously gave of their time and talents are listed in the addendum to this report.

From the time that it was clear that OPC congregations had been affected, the Florence Disaster Oversight Committee (FDOC) was established. On this committee is represented the presbytery diaconal committee (chairman, Mike Cloy), the CDM (Seth Long), and each of the three affected OPC churches (deacon Scott Cormier, Covenant, New Bern), Matt Mitchell (Heritage, Wilmington), and Alec Liederbach (deacon, Trinity, Wilmington). The FDOC met by conference call six times in 2018.

In October 2018, Fred de Ru (Grace OPC, Wasilla, AK) was graciously released from his duties as site coordinator in Houston, which enabled him to relocate to North Carolina to take up the work of Regional site coordinator there. Fred, with his wife Brenda at his side, faithfully served in this capacity through the end of 2018, and continues to do so at the time of the writing of this report. The CDM gives thanks to the Lord for men such as Mr. de Ru, without whom these efforts would not be possible.

As of the time of this writing, the Florence disaster response efforts continue.

OPC Volunteers (to the best of our knowledge):

Non-OPC Volunteers (to the best of our knowledge):