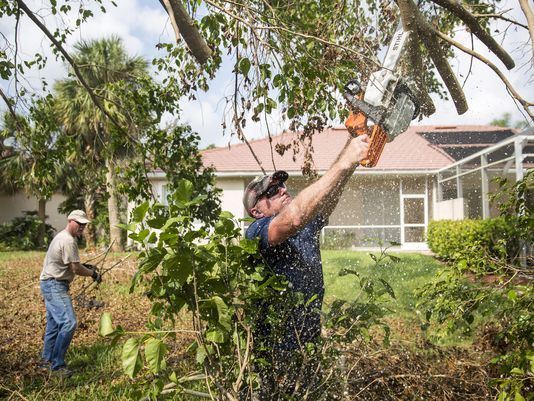 A pair of angry chainsaws cut through the humid morning air at The Shores community in East Naples this week. A wheelbarrow filled with tree remains zipped past the sleepy houses that hug the neighborhood lake. Gloved hands dragged brittle branches to the side of the winding road.

But unlike cleanup efforts happening throughout Collier County following Hurricane Irma's destructive visit to Southwest Florida, this volunteer group was anything but a cookie-cutter crew Thursday.

Eric Hausler, a pastor at Christ the King church, an Orthodox Presbyterian church near the intersection of Airport-Pulling and Radio roads, said the group is happy to help those who can't help themselves or haven't contracted out services to clear their yards yet.

"It's a tangible way to be neighborly," he said. "I've seen even in the midst of this storm how there's been good that's come out of it — we've got neighbors that know each other now that we didn't know each other before."

Homeowners at The Shores are responsible for clearing their own yards, Hausler said. The group does the work for free and plans to keep clearing backyards until Saturday or Sunday.

"I just like the fact that it helps relieve their stress," Hausler said, referring to his neighbors. "Because people are really stressed out."

When Myron Palmer first found out about the devastation the hurricane had left behind in Collier, some 1,400 miles from his Grand Rapids, Michigan, home, the stories of loss tugged on his heart.

"We saw a need," he said. "We saw what Eric and Donna (Hausler's wife) were doing and what they were going through."

Palmer, who attends Redeemer Church in Ada, Michigan, where Hausler was a pastor before he moved to Collier, rallied his congregation and told his former pastor and longtime friend that they would come south to help.

"We just put the word out," said Palmer, 52. "We initially had eight going, but because of the short notice to departure, it whittled down to five."

After members of the Michigan community donated chainsaws, money and food, Palmer and four other members of the congregation — Alex Brummel, 25; Andy Baker, 45; Jeff Rosendall, 47; and Pete Faber, 51 — piled into two trucks and started their 21-hour road trip early Tuesday.

They started work the next day. On Thursday another friend from back home — Duke Suwyn, 57 — joined their efforts.

"Work's been a bit taxing just because we're not used to the humidity," Palmer said. "But there is a great reward seeing folks, you know, break down in tears and they can't thank you enough."

"We love to do that," Nehemy Antoine said about the volunteer effort.

The Antoines, who live in a community near Collier and Davis boulevards, are no strangers to natural disasters. Standley Antoine still remembers the 2010 earthquake that ravaged his home country.

"Oh my goodness," he said. "That was terrible. That's why I want to help."

Hausler, who speaks Creole and has been on mission trips to Haiti, first met Nehemy Antoine while the teen worked as a bagger at Publix. He struck up a conversation, hired him to do some work around his house and eventually got to know his family.

"I'm so impressed with this Antoine family," Hausler said. "The dad came 20 years ago, legally. Got residency, was working at I think Olive Garden as a chef. And then sending money back. I mean it's a typical immigrant story."

Eventually, the rest of the family followed, Hausler said.

Thursday morning, as the group worked its way from yard to yard, their cleanup efforts did not go unnoticed.

"Man, those guys are fast," Bob Sullivan said, as he stepped out of his lanai and into his backyard where the group had just cleared a neighbor's mangled tree.

Sullivan, 71, and his wife, Nancy, had to evacuate ahead of the storm — first to Tallahassee, then Columbus, Ohio. The couple, which has lived at The Shores for two years, returned Wednesday.

The gated community has a lot of older residents who wouldn't be able to clear their own yards, Nancy Sullivan said.

To her, the pastor-led volunteer group was a gift from heaven.

"It's just been a godsend," she said. "Literally."