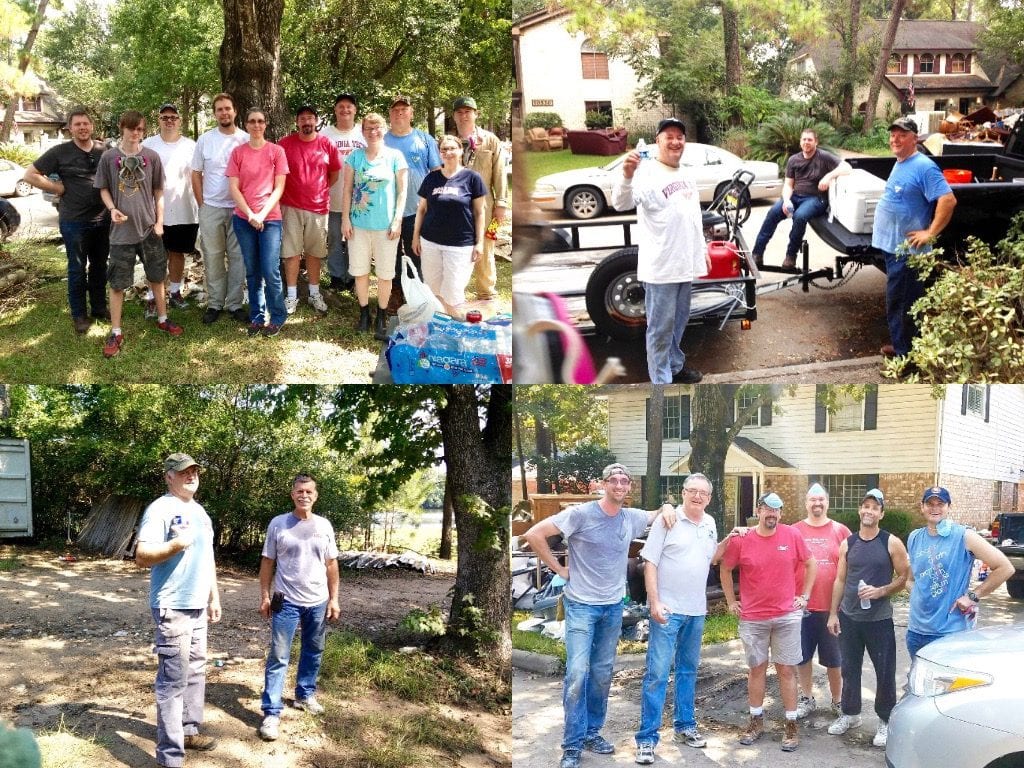 On Friday, August 25, 2017, Harvey, a tropical depression that intensified quickly into a Category 4 hurricane, struck the coast of southeast Texas. It parked in that coastal region, dumping historic records of rain that exceeded 50 inches in some areas. So much rain fell within a 24 hour period that new color codes had to be added to the weather charts. It is reported that almost 200,000 homes were flooded and more than 10,000 are deemed irreparable.

Status of OP Churches in Houston:

At one point, there were 12 families from our two OP churches in the Houston area (Cornerstone OPC and Providence OPC) that had to evacuate their homes, none of them knowing the outcome until days later. Five of those families' homes and businesses suffered significant damage due to flooding, and while we grieve with them, we also thank the Lord that there was in fact no loss of life and that the impact was not as great as originally feared. And it was with joy that I was able to join with our Houston brothers and sisters in worship the following Sunday. Restoring God’s people to worship is one of the top priorities of OPC Disaster Response efforts.

Over the course of this past week, we have established a good organization here in Houston with key roles filled by competent and gifted individuals. This organizational structure will enable the ministry of the Word to continue to be the focus of the ministry of both Cornerstone and Providence OPC, without neglecting the significant needs of the families whose lives have been disrupted by this turn of events.

Steve Larson is serving as the Regional Disaster Response Coordinator for the Presbytery of the Southwest and the Houston churches. Steve will be overseeing the disaster response effort and will serve as the spokesperson for the effort over the weeks and months (and possibly years) ahead.

Those who would like to volunteer should contact our Volunteer Coordinators in Houston - Regional Home Missionary Mark Sumpter and his wife Peggy.

In disasters, the local families are always the first to respond. And we have seen that here on the ground in Houston. So much has already been accomplished in the past week and a half! It really is incredible how “many hands make light work.” What seems like an impossible task that can lead one to despair can suddenly become bearable when the Lord’s people respond to the call to serve one another generously and without reserve. God has been good!

But the local families have to return to work and to their lives. This is where the many from around the country who desire to come alongside and help can be like Aaron and Hur, who came alongside Moses as his arms tired (Ex. 17:12). The families in Houston are prepared to receive volunteers into their homes to live with them as they assist in carrying out this important work. So, please do respond to the need for volunteers, as you are able. Be in contact with the Sumpters (below) about this.

It won’t be long before we head into the re-construction phase of the work. At that point, we will be looking especially for skilled workers to volunteer. If you are experienced with construction and have a desire to serve, we will be particularly interested in your help soon.

Please do pray for these efforts. Pray for wisdom, grace, and perseverance. Pray for comfort and healing for our affected families – the Millers, Olivers, Mendozas, Klasses, and others. Some of them have been significantly traumatized by this event. It’s a blessing to be able to come alongside them and carry this burden with them.

The OPC Hurricane Harvey Response Fund has received over $50,000 at this point. We thank those of you who have given and trust that the Lord will supply our every need, even as He has been so faithful to do in the past. May Christ’s bride bring Him glory as she takes up the basin and towel and serves - as did our Lord, who came not to be served, but to serve.

Even before the flooded sections of Houston have had a chance to dry out from Harvey’s torrents, the next named storm, Irma, has turned into a monster – the “most powerful storm ever recorded in the Atlantic Ocean!”

Just the thought of it coming into the Gulf has increased the anxiety of many Houstonians. But even if it doesn't hit them, as one deacon stated, “it just means that it’s hitting someone else.” And we know now that “someone else” has been our OP churches in Puerto Rico, our mission in Haiti, and will most likely be some of our OP churches in Florida and possibly further north.

Reports from Pastor Tom Church of the Presbytery of New Jersey (which includes the OP churches in Puerto Rico) and from Pastor Roberto Quiñones of Puerto Rico indicate that there appears to be no damage resulting from Hurricane Irma to either church buildings or homes of members of our OP congregations in Puerto Rico.

This morning, Ben Hopp, OP missionary to Haiti, sent a report that his family and our other friends and contacts in Haiti were largely spared, and that while there was some flooding in the north, it was not as bad as people expected ...

And now our attention turns to Florida. Many families have either driven or flown north. But many, including a good number of church officers, are staying behind to assist those who can’t evacuate. This includes Keys OPC Pastor Bill Welzien and his family in Key West, along with Elder Tim Warner. Please pray for the Lord’s care!

Pastor Eric Hausler in Naples sent us a report this morning that the members and friends of Christ the King OPC have been checking in with him over the last couple of days: a lot of them have evacuated, enduring the long back-ups along I-75; some are in other parts of Florida or other states; many have decided to remain at home in Naples or in shelters ...

Presbytery of the South:

Joel King, a deacon at Lake Sherwood OPC in Orlando, is serving as the Regional Disaster Response Coordinator for the Presbytery of the South. Please pray that he might have great wisdom in this capacity.

Presbytery of the Southeast:

The Presbytery of the Southeast, which includes the Carolinas and much of Georgia, is already getting ready to participate in responding. Their Presbytery Diaconal Committee meets this afternoon to discuss those preparations. Pray for them as well.

Keep an eye on the OPC Disaster Response Facebook page where updates from all of our contacts are posted as soon as we receive them. News is also posted at OPCSTM.org.