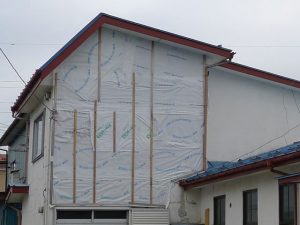 We are so thankful for the prayers of God's people, asking that the Lord raise up skilled workers to go to Japan to aid the church there in the refurbishment of the Ishinomaki Chapel.  This will be the 3rd construction project that the OPC has undertaken this year, as part of the disaster response effort.  The first construction project was to rebuild the crumbling walls of the Sendai Reformed Church of Japan (RCJ) building and the second was to transform a flooded dental office in the rural town of Yamamoto south of Sendai to become the Nozomi (Hope) Center.

In late Spring, the OPC received the request of the RCJ Tohoku Presbytery to consider helping with the Ishinomaki Project.  With the concurrence of the OPC Japan Mission and the affirmative from our building expert that this was within the bounds of our capabilities to complete, plans began to move forward for this work to be done.  The material has now been planned, purchased and shipped to Japan.  The call went out for workers and many have come forward to participate on one or more of the 4 teams of 10 workers.  Seeing that we seem to be exhausting our supply of skilled workers from within the OPC, you will see that a good number of these workers are Christians coming from other denominations to work with us as they hear about this good work through their connections in the OPC.

On Friday, Team #1 will depart for Japan.  The team is as follows:

The material is not yet on site.  It has arrived in Japan, but still needs to be transported to Sendai and clear customs.  Please pray that the civil magistrates will look kindly upon this shipment and pass it quickly through.  Pray for these men as they leave their normal responsibilities for 2-4 weeks to participate in this effort.  Pray that the Lord would give them safety in travel and in their work.  May this be a joyous experience for all involved, all to the glory of Christ's name.

I am thankful to have most of the remaining teams filled, but still have some spots available for the folks with the right skill set on Teams 3 and 4.

I was recently made aware of a video that demonstrates the impact of christian volunteers coming to Japan.  You might be encouraged in praying that there would be such a lasting, even eternal, impact on this community for the sake of the gospel.