Light in the Darkness of Puerto Rico

Light in the Darkness of Puerto Rico

From the February 2018 issue of New Horizons 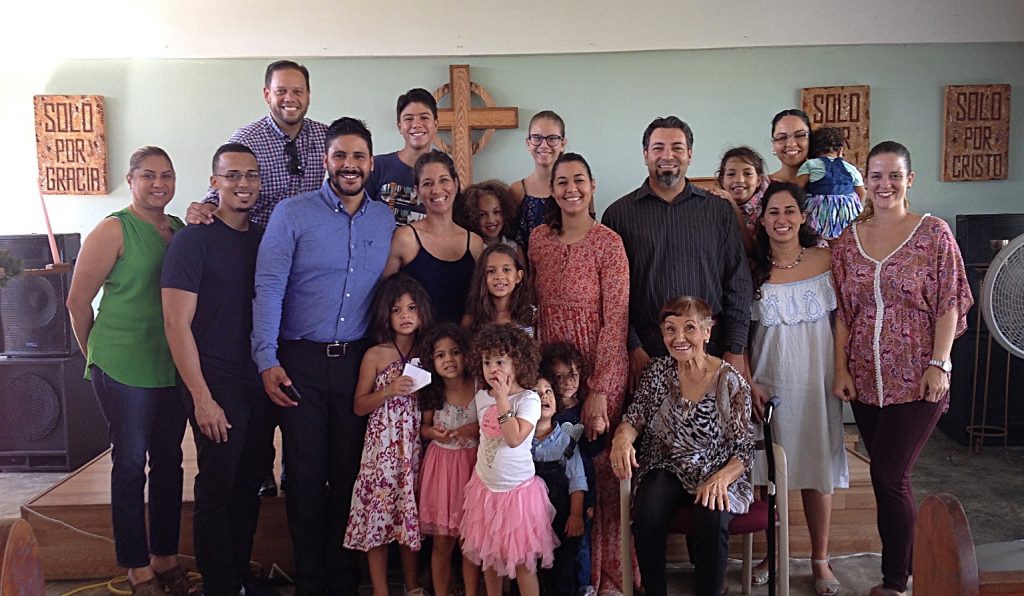 The congregation of Iglesias Uno Reformed OPC in Arroyo, Puerto Rico, with Pastor Bradney Lopez and his family in the center

When dusk descends on Puerto Rico, a familiar hum rises from barrios and businesses across the Caribbean island. It’s the sound of generators producing electricity for Puerto Ricans still sitting in darkness after Hurricane Maria ravaged the island in September.

By late 2017, at least a third of the territory’s 3.4 million residents were still waiting for the lights to come back on.

The darkness often brings malaise. Scores of people flock to San Juan’s mega-mall where power is restored and locals find a few hours of diversion at movies or restaurants like Olive Garden and Cheesecake Factory. 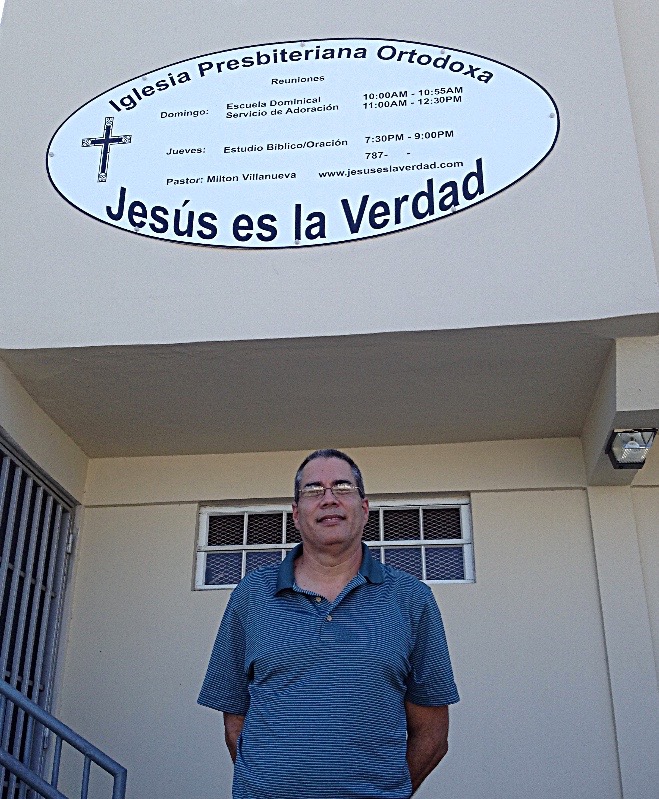 For many poorer Puerto Ricans, there are no trips to the mall or generators to crank on. There are lanterns and flashlights, but most of the time the sunset simply brings another dark night in the heat.

Even when widespread electricity finally returns to the island, Puerto Ricans will still grapple with the long-term effects of a storm that worsened problems already existing before the hurricane.

It’s a challenging place to do ministry, but for the three OPC congregations in Puerto Rico, it’s also an important opportunity to do more of what they’ve always aimed to accomplish: help people dwelling in darkness to see a great light.

A recent visit to the three churches offered a glimpse into life and ministry on an island still reeling from Hurricane Maria—and already anticipating the next hurricane season just a few months away.

The OPC’s connection to Puerto Rico spans over a decade and began through the friendship of a Puerto Rican pastor and an OPC minister. Over time, two Presbyterian churches in San Juan asked to join the OPC. Because of pastoral connections with OPC ministers in the northeast, both churches became part of the Presbytery of New Jersey.

The congregation has renovated the storefront space into a place of worship for the twenty families attending the church. On the first floor, a small fellowship hall provides a place for churchgoers to share Sunday lunch each week.

A drive around the neighborhood shows the kinds of problems many face in San Juan. Without electricity, the mechanic shop across the street was closed on a Saturday. A nearby pharmacy was selling only over-the-counter medicine due to shortages.

The church building escaped serious damage during the hurricane, but Pastor Quinones says members have coped with many difficulties: A 76-year-old man has been hospitalized twice since the storm, suffering from breathing a steady stream of gasoline vapors from generators running near his home.

Another member’s husband has cancer, and she struggled to get treatment for him after the storm. At least two people in the church lost their jobs after the hurricane, and others working for the government fear losing their positions or benefits in the future.

Church attendance also dipped, as churchgoers struggled to take care of needy family members and coped with other complications brought on by the storm. 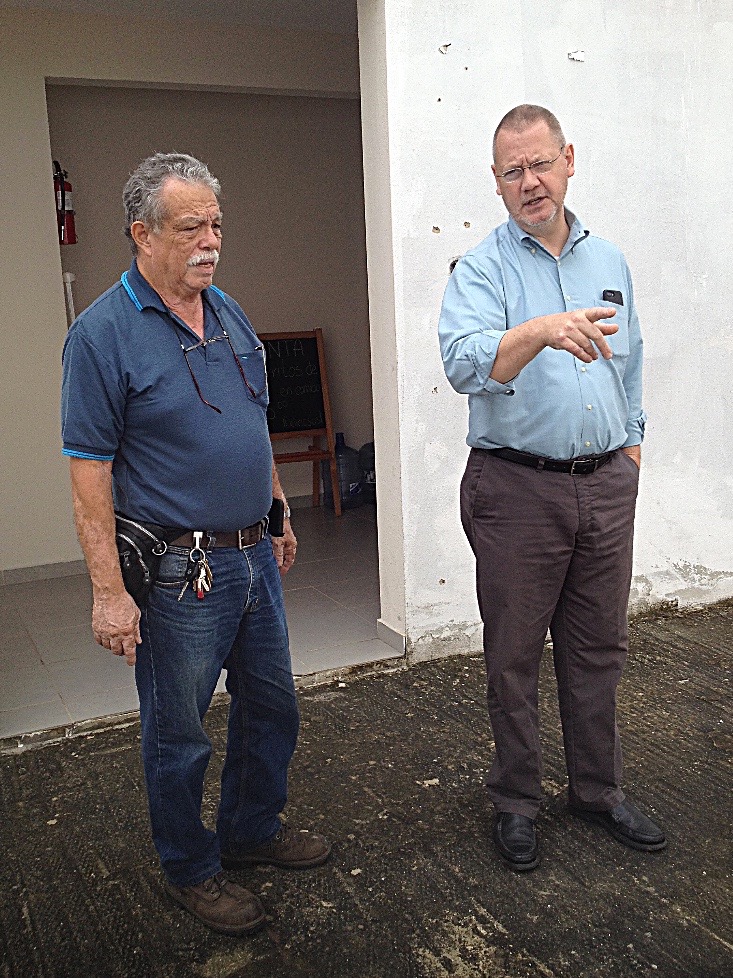 “Everything is frustrating,” says the pastor. “People are living in lamentations.”

It’s a perplexing mix of problems, but Pastor Quinones says he’s encouraged his congregation to remember God’s sovereignty. He says a visit by Pastor Tom Church of Immanuel OPC in Bellmawr, New Jersey, was also encouraging: “He reminded us that this isn’t an insurmountable problem, but an opportunity to serve.”

Opportunities to serve abound, and during a visit to a nearby barrio, Pastor Quinones checks on Ada—a church member and a single mother of six children living in a low-income area. Ada learned about the church through the congregation’s ministry to neighborhood children. The gospel resonated with her, and she professed faith in Christ and joined the church.

Since the hurricane, the church has helped Ada and her children with food and medicine, and they continue to monitor her needs.

During our visit, Ada pointed to a tarp covering her damaged roof. Her landlord wants FEMA to make repairs. FEMA wants the landlord to take care of it. So Ada and her children simply wait for electricity to return, and they cope with the rain that makes its way into their home.

Despite the hardships, Ada is thankful for God’s protection. She’s also thankful for the church and doesn’t hesitate for a moment when asked what she enjoys most about it. “The preaching of the Word,” she says.

Pastor Quinones hopes the ministry of the Word will expand. Even as many people have left the island since the hurricane (Puerto Ricans are American citizens and have no restrictions on travel to the United States), the pastor hopes the church’s continued presence will be a witness to those around them.

“We know that God calls us to do our work with devotion, and we want to spread the gospel where God puts us,” he says. “Our goal is to be present and minister.”

Across town, Iglesia Presbiteriana Reformada has the same goal. The OPC congregation also escaped major structural damage during the hurricane, though water damaged the pews.

In the church’s entryway, a map of Puerto Rico features pins showing the home locations of people who come to the church: The pins are scattered across the whole island.

The church’s radio ministry has reached Puerto Ricans throughout the territory, and some travel considerable distances to attend worship on Sundays. In the predominantly Catholic country, the need for Reformed churches is great. 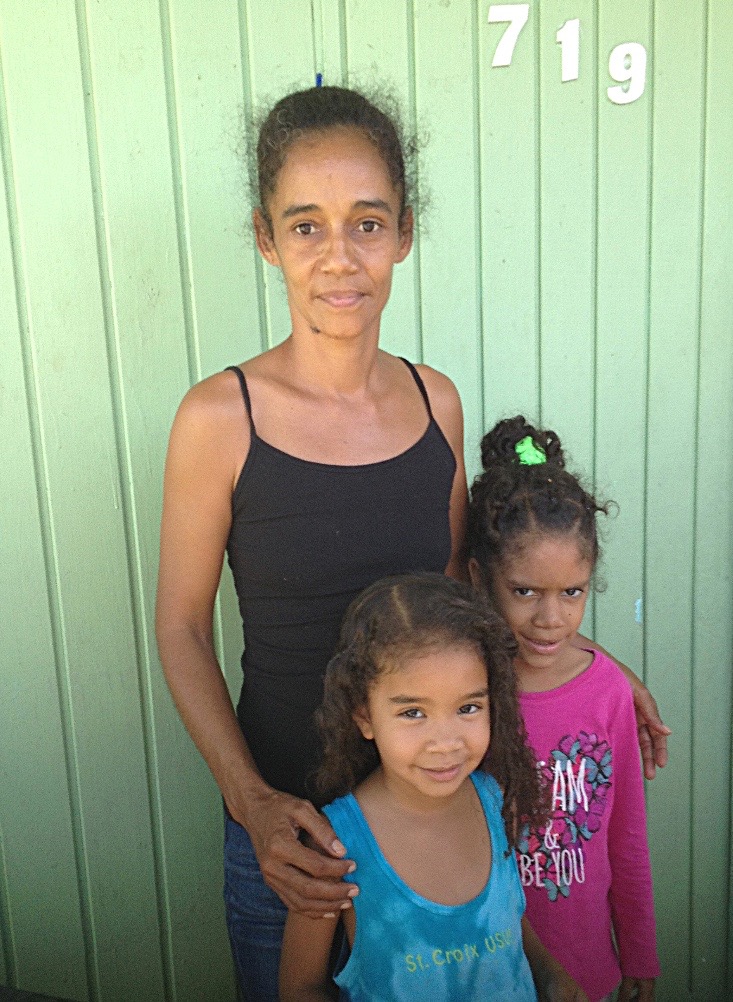 Angel Carrasquillo, an elder at the church, shows a room ready to be filled with thousands of Reformed titles donated to the church or collected by the church over the years. They hope to continue to be a resource for islanders hungry for sound teaching and eager for biblical worship.

Like other churches, the congregation has many older members, and Carrasquillo says they’ve watched young people move to the United States for education or better job opportunities.

But the congregation is enthusiastic about continuing its ministry, and hopes to reach more people close to the church. Meanwhile, they also keep an eye on a hurricane season set to begin in a few months. Carrasquillo, 68, has lived on the island his whole life, and says he’s never seen a hurricane like Maria.

The drive over a lush mountain range is beautiful, but the remnants of cleared trees reveal that the central portion of the island suffered some of the worst wind damage during the storm.

Off a narrow street in Arroyo, a building that once served as a junior high school is now the Sunday meeting space for the members of a small OPC congregation led by Pastor Bradney Lopez.

Pastor Lopez, 31, grew up in Arroyo, and he embraced Christ as Savior after visiting a Baptist church when he was nineteen years old. He pursued college and seminary, and over time, he embraced Reformed theology.

Pastor Lopez began searching for Reformed churches on the island. He discovered Pastor Carlos Cruz at the Reformada OPC in San Juan, and started driving over the mountains to attend the church with his family on Sundays.

Eventually, Pastor Lopez worked with the denomination to plant an OP church in Arroyo in 2014. The congregation is currently a mission work of the Presbytery of New Jersey.

A hurricane is a major challenge for any church, but it’s particularly hard for a small church plant. 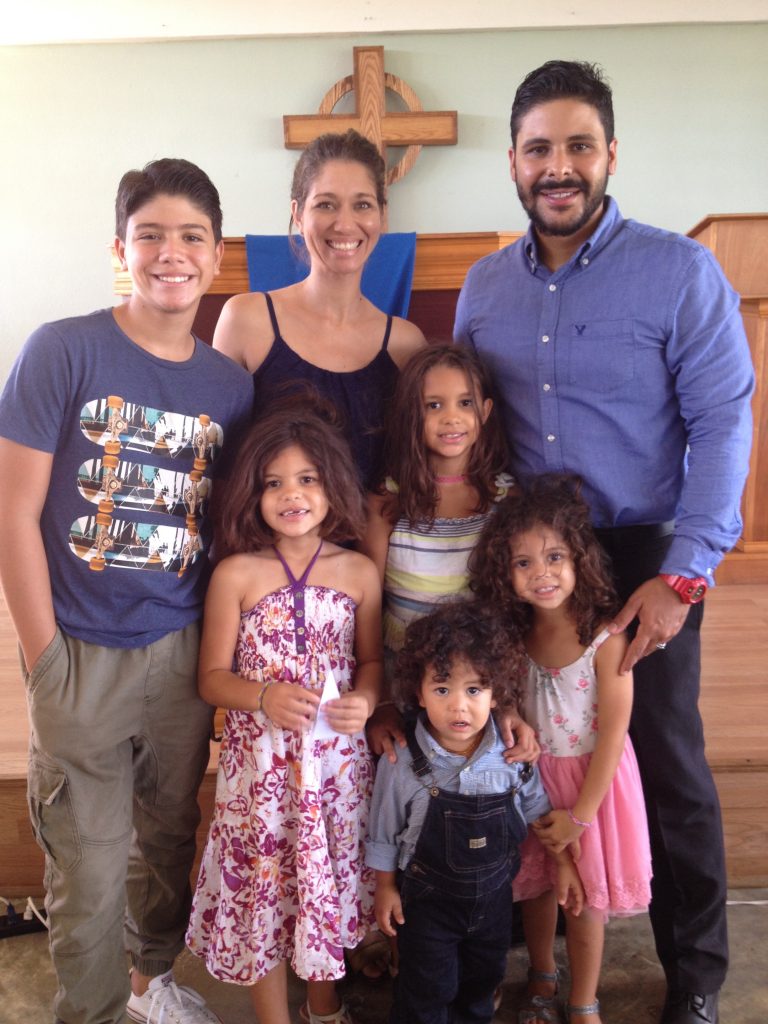 Pastor Bradney Lopez and his family

As the weeks wore on without electricity at home or church, Pastor Lopez and his wife, Eileen, learned to cope with homeschooling and caring for five small children, as even simple tasks turned into daylong ordeals, and weariness set in for many in the community.

When night falls in Arroyo, the neighborhood grows dark, and Pastor Lopez turns on a generator. It’s a daily ritual the family has longed to leave behind, but they’re also grateful that they’ve gotten to know neighbors they didn’t know before the storm. They hope those connections will lead to more ministry opportunities.

Like other churches, they’ve seen a handful of members leave for the United States. Some say they’ll return when conditions improve, though it wasn’t clear when that might happen.

Still, on Sunday morning, a handful of families in Arroyo gathered at the church for a rich worship service in one of the school’s larger classrooms. The members sat in wooden pews, and an elder helped to lead worship. A generator powered a fan to circulate air, and Pastor Lopez preached above the hum.

He was continuing through his study of Acts, and he exhorted the congregation to be prepared to share the gospel with unbelievers: “Our purpose as Christians is to bring people from darkness to light.”

With nearby mountains visible in the distance, the light outside was darkening over the green hills, but the light of the gospel burned brightly among the small gathering of saints eager for worship.

After the service, they enjoyed fellowship over a simple meal and spoke of plans for next week’s gathering. When I left, they warmly urged me to return someday. Even after a short visit, Eileen Lopez told me: “You have a family in Puerto Rico.”

The same is true for the whole denomination. Though everyone isn’t able to visit, all members of the OPC have church family in Puerto Rico.

Pastor Dick Ellis, an OPC pastor in New Jersey who serves on the presbytery’s home missions committee, urges the OPC to pray for these dear congregations. He encourages praying that the pastors and members would make the most of opportunities for outreach, but also that the Lord will strengthen them in hardship: “Pray that they will be steadfast and immovable … knowing that, in the Lord, their labor is not in vain.”