News From Long Island After Sandy!

News From Long Island After Sandy! 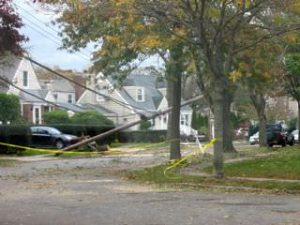 The street behind the Shishko's house

Dear brothers and sisters, First, thank you for your prayers for those of us in the Northeast who, eight days ago, began to endure the wrath of Hurricane Sandy.  One feels his or her own helplessness before 70 and 80 MPH gusts of wind that threaten to (and in many cases actually did) topple huge trees before your very eyes.   I apologize for the delay in sending out this report and update, but we just got power back to our home in Malverne at about 9:30 this morning.  It was so good to feel heat after 7 1/2 days without power.  Our experiences over years of camping as a family came in very handy as we went through days without light, heat, and with increasing cold!

Last week we all went through a period of shock and disorganization as we witnessed or heard of downed trees that damaged or destroyed homes, pulled down power lines, and blocked roads throughout the metropolitan New York and Long Island areas, as well as much of New Jersey.  On Long Island alone, about 3/4 of the population was without power for some time.  As of today, about 200,000 Long Island Power Authority customers are still without power.  Hundreds of thousands of people experienced moderate to severe flood damage to their homes.  I have heard the figure of 100,00 families whose homes are now uninhabitable due to wind and flood damage.  Serious sanitation problems came in the wake of power outages on the North and South Shore of Long Island.  Long Beach, which is a major coastal community here in Nassau County, was flooded throughout, and over a one mile area between the coast line and the canal that divided Long Beach from the rest of Nassau County.  Following that, major vandalism occurred.  The lower part of Manhattan was flooded, including the Brooklyn Battery Tunnel which connects Brooklyn with lower Manhattan.   On both the North and the South shores of Long Island, boats were carried ashore and dashed into houses.  Motor vehicles were submerged in sea water and destroyed as a result.  Fire Island, the barrier Island between Brooklyn and Long Island, has been obliterated, having received the brunt of Sandy's power.  Storm surges of 11 - 12 feet were recorded as westerly moving winds from off the shore met with tides made higher than usual by a full moon.  It has been sobering to see homes that have lost everything in at least their first floors.  The expensive furniture that adorned them is now smelly trash on the side of the street.

I praise the Lord for the quick action by both David Haney and David Nakhla of the OPC Disaster Response Team.  On Friday of last week, after experiencing a couple of days in which it was almost impossible to make contact with people even by cell phones, I received a distress call from one of our widows whose basement was completely flooded.  She needed a generator.  By that time generators were unavailable at the stores.  Literally about one hour after praying (with a great sense of helplessness), these brothers showed up with a truck that included generators and much needed gasoline.  (Gas lines on Long Island have been nightmares.  People have been waiting in line for sometimes up to 3 hours to get gasoline).  We were able to get to the widow (after taking many back streets because the major roads to her home were blocked) and provide her with a generator, gas, and some cash to help her.  (Most banks were unable to open or function with the power outages).  We were then able to help another elderly OPC Franklin Square couple whose basement had flooded.  The sea waters had also destroyed their van and the generator they owned.  We were also able to help another widow who needed gas to power her generator. It was both sobering and wonderful to see her family members and a couple from the church (that drove out from Queens) helping her with the sad task of ripping out the walls of her ruined basement.

The next day (Saturday), David Haney and Richard Duggan of the OPC Disaster Response team came with a huge truck of generators, gas, heaters, fire logs, cleaning supplies, and ice (which was in short supply, too).  We spent most of Saturday getting the generators and other items to as many families as we could.  What a joy it was to help one of our Long Beach families (who had to evacuate their apartment in Long Beach) who had moved in with the wife's parents here in Malverne.  Both of her octogenarian parents have serious health issues - and they were without power.  We were able to install a large generator with power enough to provide heating and lights for them.  In all cases we tried to give priority to the elderly, the widows, and those without power who had no other place to go to live.   It was a day of experiencing the truth that it is "more blessed to give than to receive."
Praise the Lord that the power at the church building finally came on on Saturday.  We were able to have worship and a combined Bible School class on Sunday.  OPC Disaster Response Coordinator, David Nakhla, was with us, and told us how to organize and work with him to provide the assistance that we need.  Christopher Shishko, who is a lawyer here on Long Island, then provided very helpful information regarding how to work with insurance companies in making claims.  Throughout we emphasized that disasters like this are God's scaffolding (as all of world history is) behind which the Lord is building His church.   We were all challenged to show Christlike love in giving ourselves for the good of others and letting our lights so shine before others that people may see our good works and glorify our Father who is in heaven.

Yesterday our disaster relief site coordinator, Al Zarek, and I began to lay out our long term plans.  We are in regular contact with David Nakhla, who has already arranged for an electrician who is an expert in heating systems to fly up here from Orlando, FL to be with us for about 10 days to help get the heating systems of our church families and others operable.  We will also need teams to help with clean-up projects.  Pray for our witness to others through his labors and the teams that will soon be working on the massive clean-up projects.  Last night a half a dozen of our church ladies spent three hours getting clothing together to give to needy families.  (I have heard the figure of 500.000 winter coats being needed.  It's beginning to get cold up here!).  Pray that these will be distributed faithfully.

I appreciate the many who have asked about diaconal offerings to help us.  There is no doubt that we will need much financial assistance to supplement FEMA and insurance help.   Please send these gifts to the OPC Diaconal Committee, designating them for "Hurricane Sandy Relief".   This may well be the greatest challenge to your Diaconal Committee, given the nearness of this disaster, and the number of OPC congregations involved.

Also, please pray:
1.  That those still without power can get it soon; and that sanitation problems can be corrected without serious health consequences.
2.  That much needed gasoline will be provided to New Jersey, Long Island, and metropolitan NYC.
3.  That the Lord will restrain those who would use this time as an opportunity to vandalize others.
4.  That the Lord would not permit the Northeaster that threatens our area tomorrow to come with power that would make things worse here.  Many people have partially felled trees on their property.  These could easily topple with another storm.  We also need an extended period of dry weather so that previously flooded basements can dry out.  We cannot do rebuilding work in basements without that.
5.  That the church families (and others) who have lost their homes would be able to have their homes restored.
6.  Above all, that the Kingdom of God will be furthered in this area through the testimony of Christians, especially our corporate OPC testimony as we work together to show the love of Christ to others.   Pray that many in this area will learn the all important truth that a person's life most definitely does not consist in the abundance of his possessions.

In times like this, how I ESPECIALLY rejoice that we are blessedly NOT "independent", and that we have the rich textured fellowship of individuals, families, congregations, the OPC as a whole, and other Reformed and Presbyterian churches with whom we have the ties of fellowship, love, and sacrificial commitment.  Pray that this Psalm 133 testimony will, according to God's explicit promise, bring salvation to many.

Yours in the service of the Lord of the winds and the waves,
Bill Shishko