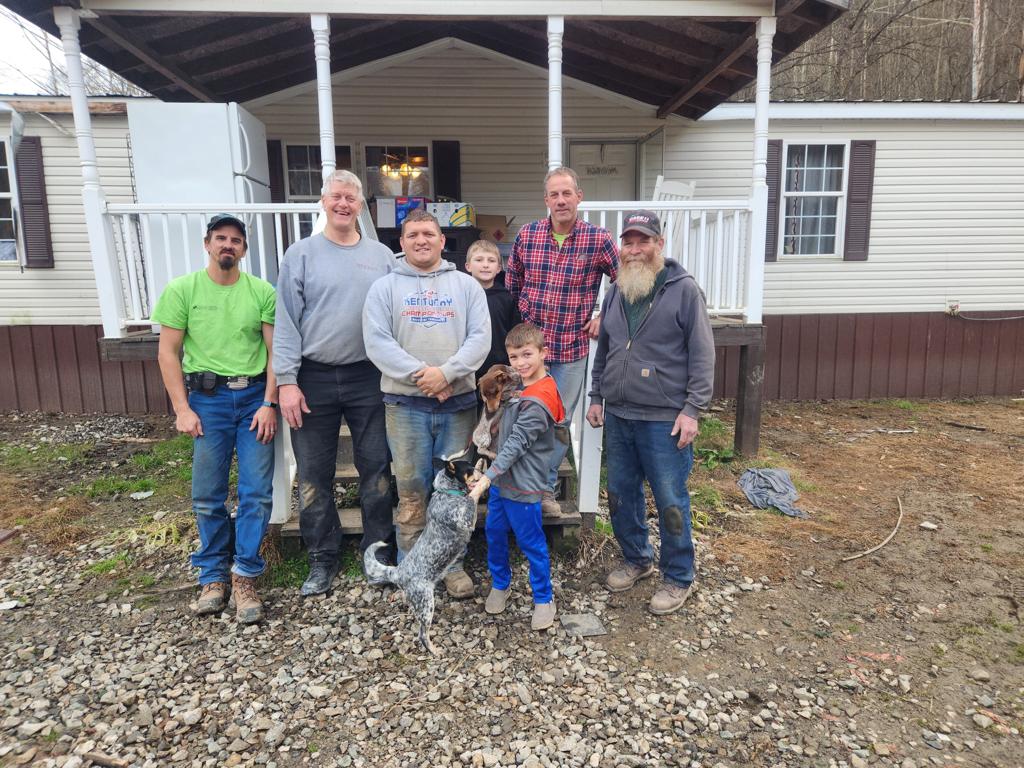 The Neon Disaster Oversight Committee has determined to pause the Neon Community Outreach effort for the winter. Lord willing, the effort will restart in March, 2023. Volunteers will be needed! Please prayerfully consider how you can serve.

A Spring 2023 Mercy Coordinator has been identified! Thank you for your prayers for that need. More information will be coming about that very soon.

The PCA’s MNA Disaster Response is coming alongside the OPC’s disaster response efforts in Neon, KY, by means of their Sheds of Hope program.  Through the Sheds of Hope ministry, we have been able to gift hurting neighbors with a secure, dry, and clean shed built on their property into which they can store the few valuable possessions salvaged from their flooded homes. MNA DR is supplying the pre-fabricated sheds. We will need your help to construct the sheds and bring words of hope to those who continue to suffer. Anyone with a strong back is equipped for this task and other non-specialized projects as well. This effort will pause for winter, and, Lord willing, will begin again in February or March.

Watch this brief video to find out how Sheds of Hope came about and get inspired to build sheds in Neon, Kentucky!

We are very happy to report that we feel this need has been fulfilled! Over 150 book donations were received and with the monetary donations, we we will pursue purchasing the remainder of Pastor Jay Bennett’s library books. Thank you all for the generous book and monetary donations that allowed this to happen so quickly!

Pastor Jay Bennett and his family went to bed as normal on Wednesday evening, July 27th.  At 2:30 am they were awakened by a blaring flood warning on Jay’s phone. By the time they were roused and looked outside, the floodwaters had reached a level that would have been unsafe to wade through. Living in the second-floor apartment above the solid brick building of Neon Reformed OPC, they were safe from what would become a raging torrent of water. Sadly, it’s become clear that there were many in Eastern Kentucky who were not so safe.

As the early morning hours progressed, they watched their Toyota Corolla float away, down the river that, just hours before, had been State Highway 317. Their Toyota 4-Runner was subsumed as well.  They knew water had entered the church building below when they began to hear items in the bottom of the stairwell knocking against the wall as they floated and as plate glass windows exploded under the pressure of the rising river outside.

Weather.com reported that one of the rivers in that area rose eighteen feet in eleven hours, six feet higher than its previous record set 65 years ago in 1957.  The mountainous topography of Eastern Kentucky with its deep valleys or “hollers”, as they are called locally, serves to funnel all the rainwater quickly into the network of rivers at the bottom, where most of its residents live. It’s been reported that that some places saw as much as nine inches of rain! One resident stated they don’t recall seeing that much rain in the forty years they lived in that area.

As quickly as these rivers rise, once they have crested, they often recede just as quickly. As such, later in the day on Thursday, Pastor Bennett and Elder Seth Long were able to assess the damage to their church building. They reported that the muddy flood waters reached more than six feet in the church building, staying in the building for almost eight hours. It became immediately clear that all the interior of the building and its contents, including Pastor Bennett’s library, had been destroyed.

Without flood insurance on the building, it is anticipated that this will not be an insured loss. As such, Neon Reformed OPC is working with the Presbytery of the Southeast to assess the damage to the church, its members’ homes, as well as the neighborhood. The Disaster Advanced Response Team (DART) is making plans to deploy a team to begin the initial work of clearing debris this weekend. Elder Mike Cloy (Landis OPC, Marion, NC) will deliver a trailer full of OPC Disaster Response dehumidifiers to Neon over the weekend as well.

Please pray for the congregation of Neon Reformed OPC in Neon, KY, and the surrounding region. Praise the Lord for sparing the lives of all the church members from injury, and remember those who are mourning the lives of those lost in this flash flood. Pray for travelling mercies for those heading into Neon to assess and respond.  And pray about when you might participate in the clean-up and rebuild effort that will be soon to come. If you have not yet registered as an OPC Disaster Response volunteer, that is the first step in volunteering: https://opcdisasterresponse.org/volunteer-registry/.

OPC Disaster Response established the “Kentucky Flood Fund” to receive donations and we are happy to report that all of the needed funds have been donated and we are no longer collecting for this effort. Thank you to all who have donated!

Updates with more information about this disaster can be found on OPC Disaster Response’s Facebook and Instagram pages, as well as on our website, OPCDisasterResponse.org as they become available.