From the December 2017 issue of New Horizons 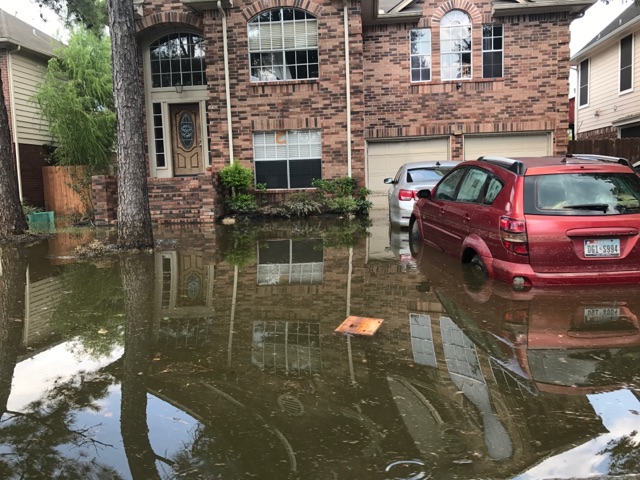 Flooding in Houston after Harvey

When the rain started in Houston on August 26, it didn’t stop until the whole city was at least three feet deep in water. “Some areas in the thirty-inch range, some in the fifty-inch,” explained Steve Larson, Disaster Response Coordinator for the OPC in Houston and member of Cornerstone OPC.

When the water receded, Cornerstone in northwest Houston, sister church Providence OPC in northeast Houston, and church plant Good Shepherd OPC Bible study in southwest Houston, all sprang into action. Their timeline was simple, explained Larson. The top priority was to help those within the household of faith; then, as donations began coming into the denominational disaster response fund, to help those in need outside the church.

“We are trying to help as many people as we can in two ways: physically relieving their distress by helping them recover from the flood, but also ... with outreach and ministry in the name of Christ.”

“Deed and word” is how Mark Sumpter summed it up. Sumpter, Regional Home Missionary for the Presbytery of the Southwest, and his wife, Peggy, moved to southwest Houston in 2015 to focus on a church plant in that suburb, now the Good Shepherd Bible study. He believes that Harvey has given the Houston believers a unique chance to minister. “The bottom line is that we see ourselves with a completely providential window of opportunity,” Sumpter said.

Ministry in deed has been hard work. Step one was to clean and dry out flooded sites—a job that has to be done almost as soon as the water recedes. Wait too long, and mold sets in.  Step two, which will take years, is to rebuild.

The need is widespread. One family from Providence owned a family business that was ravaged. Another OPC member referred the churches to two sisters who lived with their mother in a small house their father had built. Without flood insurance or resources, these women had no way to restore their flooded home. Yet another referral was to a family who lived in an area that was never supposed to flood—and now their home had to be completely gutted.

In the fourth-largest city in the US, however, the question of who to help, and how much help to give, can be overwhelming. As Larson said, “We’re a small group.… We can’t help tens of hundreds of people.” Yet, Sumpter explained, each member and family of Cornerstone, Providence, and Good Shepherd Bible study has a circle of relationships that provide a natural platform for ministry and service. After Harvey, church members began speaking up about neighbors, work colleagues, and relatives who were hurt by the storm.

“That effort has been organic up to this point,” Larson said. As the churches look to the months ahead, though, they are beginning to build an infrastructure for sustained ministry. “That’s a term we’re starting to use down here,” Sumpter said. “What is going to sustain us? What is going to give us that long-term impact in our spheres of ministry and service to the greater Houston area?”

The beginning of sustained ministry, he explained, is hospitality. The neighborhood where a church member or family lives becomes an opportunity to host a block barbecue, to get to know those who come, and to befriend them. Then, the church members and volunteers who also attended the event are able to knock on doors as familiar faces and offer help—hauling something heavy, reconstructing drywall, clearing trees. The process for outreach is “hospitality, meeting people, then seeking to seize those opportunities for material service,” Sumpter listed.

This measured progression is in stark contrast to the fast-paced, efficiency-focused aid that inundates a city after a disaster like Harvey. But it’s in line with the wisdom from experienced OP deacons who traveled to Houston to volunteer. “These deacons who are coming to us, OP deacons, are absolutely incredible. They are showing us as pastors and showing us as church folks what it means to really minister in Christ’s name down here in disaster response,” Sumpter raved.

The first thing to do, one deacon told Sumpter, is to slow down. In a time of disaster, people are both paranoid and hurting. They don’t know who’s knocking on their door—it could be a looter or a contractor pressuring them into exorbitant rates. When one knocks on the door to offer help, especially for free, one must show respect and listen in order to build a relationship.

And people respond. “You can be in this home for five, ten minutes, and these big Texan, bruisin’ men will start to fall in front of you because their lives have been faced with tragedy,” Sumpter said. “It doesn’t take long at all to start talking about hope, and Christ, and prayer.”

Ultimately, the goal is to invite folks to come to Good Shepherd and the two churches. But the immediate result is often different. Larson reflected on the help given to one Christian family who attend another church in the area: “We’ve made a significant impact on their lives…. They have a newfound appreciation for God’s providential care for his people.”

As devastating as Harvey was, the daily news cycle quickly moved on and national interest faded. For those in Houston, however, it won’t be forgotten any time soon. “There are still going to be people who need help for a long time,” Larson said. In fact, Harvey’s effect on the Houston OP churches may just snowball.

“We anticipate in the months to come that our circle of influence will continue to grow. That means we will be in contact with more families, more needs,” Sumpter said. And to meet those needs, both materially and spiritually, volunteers are required.

Six weeks after the hurricane, Good Shepherd was for the first time finding a balance between what they call “Harvey outreach,” and their already-established ministries. They hope to use their ministries that are already in place as tools along with the Harvey-aftermath ministry.

As they do, the relationship they have with the two OP churches will be stronger than ever. During the storm, the deacons and elders worked together to communicate about the safety and condition of members. After the storm, they’ve collaborated on Harvey response and volunteer coordination. As Adam York, pastor of Providence, said, they all knew each other before Harvey, but now they know each other much better.

“Before the hurricane hit, I was working with Mark Sumpter on a variety of projects to tie the churches together,” York explained. “We had a plan! And the Lord had a different plan. His plan was Hurricane Harvey, to bring our churches even closer together.”

And next time a disaster hits Houston, the area churches intend to be prepared. Larson and others are working to establish a permanent disaster response committee made up of laypeople and leaders from the churches to manage local response. That way, he said, “A year or two from now … when we expect to see another disaster coming down the road, we’ll have the organization in place to really hit the ground running.”