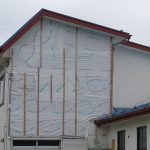 Two weeks now have passed since the beginning of the reconstruction of the Reformed Church of Japan in Ishinomaki Japan by Team #1. The efforts of the team have been very effective as all the demolition required has been completed. Much of the electricity work has been completed and David continues his efforts to modernize the facility with a combination of US and Japanese supplies. All the outside stucco has been removed exposing the frame as well all the floorboards on the 1st floor. The wall coverings and insulation have been removed and the ceiling has been removed exposing a sequence of attractive beams. It was determined by the team to leave the ceiling open and expose these beams. It has made the appearance of the sanctuary more open and expansive. Carpentry work has proceeded to include two ‘pocket’ doors leading to and from the kitchen which will be modernized by future teams.

On Tuesday, October 30th the first of 5 shipments began to appear on site. By the end of Wednesday all the material from the shipping container which originated in the US was delivered. To manage the deposit of the material on such a small lot along with the piles of rubb 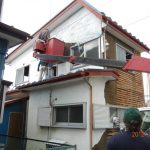 ish was a challenge. The rubbish has been removed and small bins to collect new waste from the construction teams have b 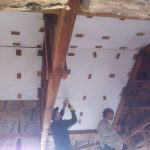 een established to accommodate Japans strict adherence to sorting their debris and trash. Almost all the outside sheathing has been installed and one half of the insulation on the first floor is complete. The styrofoam shown in the team pictures has been used as a moisture barrier under the floor of the first floor. Now all the floor underlayment has been laid with the exception of one room where the kitchen cabinets and several doors are being stored. The team takes delight in seeing the piles of construction material begin to disappear through utilization. Lord willing, the building will be fully enclosed with all the sheathing installed on the exterior walls and ‘paper wrapped’ on all sides on Monday.
The team has been blessed with the fellowship of our Japanese brothers and sisters in the Lord. T 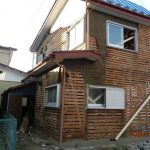 heir hospitality has been overwhelming. Wonderful dinners have been delivered to the residence (Sukaro House) along with lunch for the next day. November 1st the team members were treated to a wonderful sushi dinner after a quick tour of the Sendai Castle and a secondhand resale shop (for souvenirs). That evening the members of the team were blessed with the comforts of the Nozomi Center in Yamamoto. What a wonderful facility! Cal Cummings and the others have done a magnificent job of developing that building to accommodate the needs of visitors, foreign workers, and the local community. Our wonderful host Yui, made the evening feel like we were staying in a "5 star hotel". 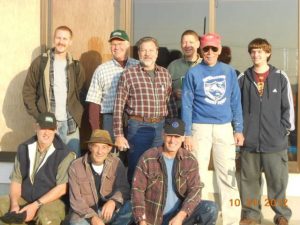 On Friday morning we woke early to drive 4 members of Team #1 to the Sendai airport. There we said good bye to Glenn, Mark, Bruce, and Tim. The team was blessed with their fellowship as well as their commitment to be the hands and feet of the Lord in beginning the work of reconstruction at the Ishinomaki church. They are missed but those remaining look forward to the arrival of 3 new members for Team #2. The new members, Brian, Jim, and John, will not be lacking for work to complete. Tomorrow the three of them will be worshiping at the Kita Nakayama church with Edie Cummings and the 6 of us will be worshiping at the East Sendai church. Afterwards the members will join up at Murray Uomoto’s home for lunch and fellowship.
The Lord has indeed blessed the Ishinomaki project team members. Although we sleep at night on the floor, we have an abundance of conveniences including a variety of food and new friends. We all miss our loved ones at home and have stressed the utilization of ‘Skype’ most evenings. We think and pray for those that had to prepare and to experience, and now to see and feel the after effects of Sandy. May the Lord show His mercy and grace for those who have experienced this ‘tsunami’ type event. We are thankful to God for those who were spared destruction even though they had the inconveniences of the loss of power and other things that we Americans take so much for granted. As a team, we will be praying for the elections that occur this week in the US and that the will of the Lord may be done and that He will work in and through those leaders that will be elected. God is sovereign – Praise be to the Lord, for He is so good and so great!!
Editorial Note: OPC Disaster Response expresses thanks for these men who have gone to serve on this first team.  The work they completed is a great blessing and encouragement to the saints in Japan!

Tagged: Japan Tsunami Archives
×