Ready for the Storm

Ready for the Storm

From the December 2018 issue of New Horizons 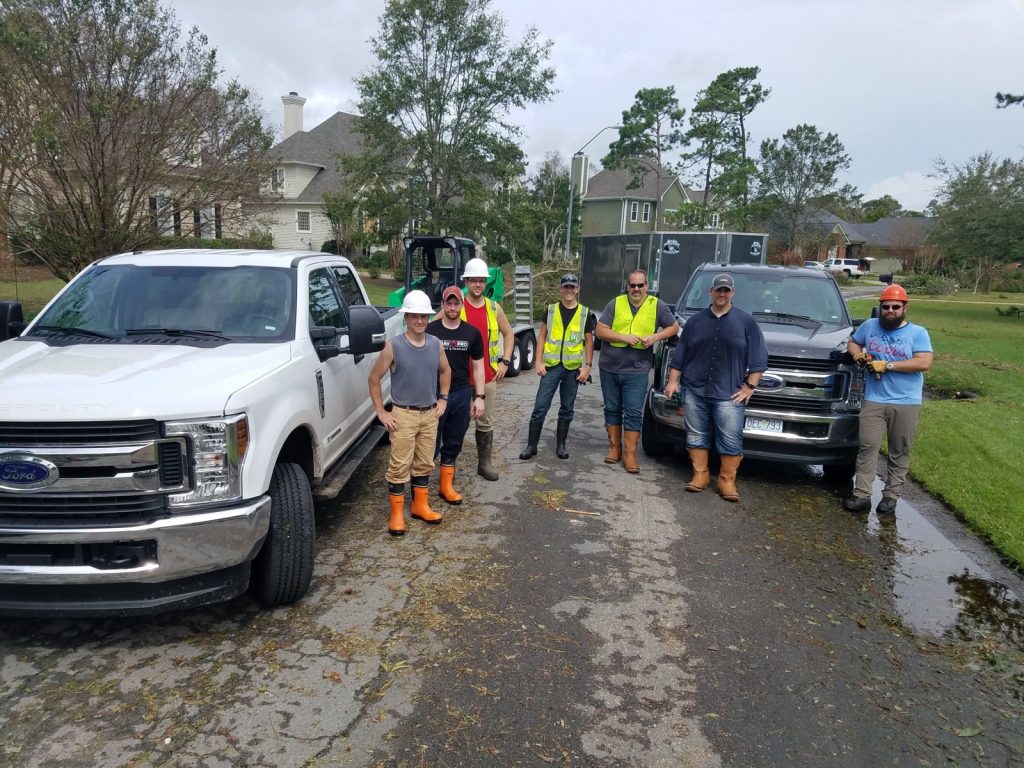 On September 8, six days before Hurricane Florence made landfall on the North Carolina coast, OPC disaster response coordinator David Nakhla got a call from Aaron Dorr, a deacon at Grace Reformed Presbyterian in Des Moines, Iowa. Dorr and his four brothers wanted to know if they could help.

Over the last few years, the Dorr brothers have gained an interest in hurricane response. They outfitted an eighteen-foot trailer with disaster response supplies, including chain saws, trash pumps, generators, and fuel canisters. When they heard about Florence, they were ready to serve OP congregations in the path of the storm.

Dorr told Nakhla that they were eager to arrive on the coast prior to Florence’s landfall because, in their experience, flooding and roadblocks make entry into the affected area difficult after the storm has passed through.

David Nakhla immediately connected Dorr with two members of the diaconal committee of the Presbytery of the Southeast (PSE)—ruling elder Mike Cloy and me.

Cloy, who led disaster response efforts while serving in the Army, has assisted the PSE and the OPC Committee on Diaconal Ministry with disaster response training, including producing two short videos to help local deacons and presbytery diaconal committees prepare for incidents like hurricanes. By the end of the day on September 9 (five days before landfall), Cloy had identified the churches in the path of the storm and laid out a multi-phase disaster response plan (preparation, assessment, coordination) to the PSE diaconal committee. Cloy and I began contacting the officers of the churches in Virginia Beach, Virginia; Wilmington, North Carolina; New Bern, North Carolina; and Covenant URC in Pantego, North Carolina. We notified them that the PSE diaconal committee was positioning itself to assist in the wake of the storm and reminded them of the training we provided at the PSE diaconal conferences in 2015 and earlier this year.

We also had a conference call with four of the Dorr brothers, who were in four different states, to discuss their capabilities and intentions. Work on the family farm as young men gave these brothers experience in chain-sawing and other skills needed for disaster response. Cloy and I began making arrangements for them to stay in the building of Trinity Reformed in Wilmington.

Ben Dorr drove straight from Minnesota to Ohio to pick up his brother Chris, and they then drove together to Wilmington with the trailer of supplies. They left without time to buy food or pack sufficient bedding, so they made a brief stop in Raleigh for those supplies. They arrived in Wilmington early in the morning of September 13, twenty-four hours before landfall.

At the same time, the elders and deacons from the congregations were busily compiling information on their congregants’ plans to weather the storm. About half the church members evacuated, and the remainder stayed in their homes. Cloy and I worked to ensure we had contact information and locations for everyone who was remaining in Wilmington.

As the rain was falling on Friday, September 14, the disaster response team and elder Marc Yandle were able to check on many of the congregants from Heritage OPC in Wilmington, who had sheltered in their homes. This required chain-sawing their way through downed trees on the roads. Mercifully, there were no injuries, no significant damage to homes, and no damage to any of the buildings that the churches meet in.

The second wave of our disaster response team wasn’t able to leave for the coast until after the storm had begun. Alex Dorr and Ben Kitchen from Covenant Presbyterian in Buford, Georgia, and their friend Ben Greer left Friday and drove into the storm to arrive in Wilmington in the middle of the night. 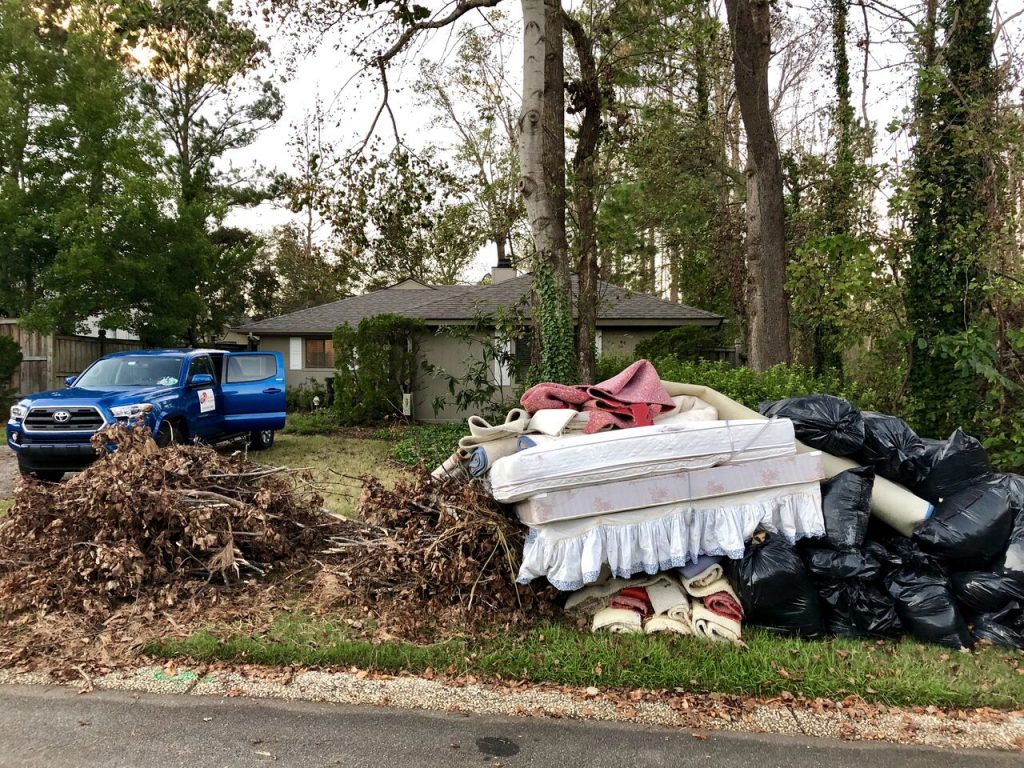 On Saturday morning, September 15, the crew attempted to travel the ninety miles from Wilmington to New Bern, which was hit harder by Florence, to assess the damage. However, the flooding was too severe, and they had to turn back. That afternoon, the disaster response team checked on several families from Heritage and Trinity Reformed who live outside the city; they were able to use one of their generators to help a farmer save multiple freezers full of chicken.

The final wave, Aaron and Ethan Dorr, flew from Des Moines to South Carolina on Saturday afternoon. Unable to pass flooded roads in their rental cars, they waited until the team in Wilmington drove out through the flood waters on Sunday morning, September 16, to retrieve them.

The labors continued that day as the team removed trees from the roofs of church members and neighbors of Trinity Reformed. They also pumped 20,000 gallons of water out of the finished basement of ruling elder Greg Bebb’s medical office in Wilmington. In New Bern, deacon Scott Cormier and the elders assessed the situation of members of Covenant Presbyterian. One had a flooded rental property. Several had trees on their roofs.

On Monday, September 17, the disaster response team began another full day of tree removal around Wilmington. This work was greatly assisted by their foresight to rent a skid steer prior to the storm’s arrival; they pulled this behind a truck and used it to move trees that manpower alone could not have moved.

In New Bern, Cormier discovered that one home of a family from the church was completely flooded. We began assembling a team from Covenant Presbyterian and Covenant URC (sixty miles to the north) to start removing wet drywall in that home the following day. If drywall is removed quickly enough, mold doesn’t have a chance to set in, and there is a good chance that the wood structure of the house will not need to be repaired.

The morning of September 18, the disaster response team made a second attempt to travel to New Bern to assist with tree removal. After several false starts, they found a route around the flooded roads, and began removing downed trees and assisting with demolition in the flooded home. The three men from Georgia headed home the next day, and the four remaining team members stayed in New Bern through Wednesday to cut more trees.

We thank the Lord for providing a skilled team who traveled many miles to bless their brethren. Because some team members arrived prior to the storm, they could respond to the disaster even as the storm was bearing down. The development of a response plan by the disaster response team and diaconal committee of the PSE, in conjunction with information from local church officers, allowed us to ensure that each of our church members was accounted for and property damages were assessed once the storm hit. We estimate that the work done by the disaster response team saved recipients over $100,000 in tree cutting, driveway and road clearing, tarping, pumping water, and demolition of flooded properties.

The mission of the disaster response efforts of the PSE diaconal committee is to restore corporate worship as soon as possible after a disaster event and to love our neighbors in the communities hit by a disaster. We thank the Lord for faithful church officers and church members serving one another and their neighbors in this time of crisis.