This article was first published in the October 2020 edition of New Horizons magazine.

When floodwaters filled Glenn and Michelle Moots’s house with two inches of mud and dumped another six inches into their driveway, the couple wasn’t sure they ever would live in their single-story home in rural Midland County, Michigan, again.

Heavy rains caused the ninety-five-year-old Edenville and Sanford dams to fail on May 19 and, during the next few hours, water drained out of the manmade Sanford and Wixom lakes that the dams protected. Gone were the homes, cottages, boats, and docks that had seen many summers of fishing, swimming, and boating. What was left were surreal, mud-filled beaches. As many as eleven thousand people were evacuated during the evening and night. By May 20, when the swollen waters of the Tittabawassee River began to recede, local residents found that the village of Sanford had been decimated. The village hall had been pushed from one area of town and smashed into another building. Many homes were destroyed, and many others severely damaged.

“First responders came door to door, and we started hearing sirens everywhere,” said Michelle Moots, describing their evacuation to the nearby community of Clare in the middle of the night.

“We weren’t sure if the house was still going to be there,” said Glenn, recalling the couple’s damage survey the next morning. “There were houses that were floating away. There were houses washed off their foundations. [Some] houses had washed into neighboring houses.”

What the Mootses didn’t know was that calls of concern from their home church, Christ Covenant Orthodox Presbyterian Church in the county seat of Midland, were being passed on to OPC Disaster Response. They didn’t know that, in just a few days, volunteers would show up to rip out sodden materials and dry out what remained. Later, these volunteers determined the house was salvageable and brought equipment to begin what will be a months-long process of demolition and rebuilding. 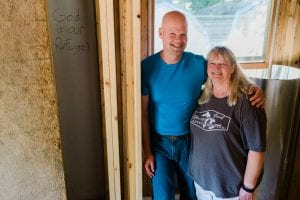 Glenn and Michelle Moots in their home, where volunteers and family members have written encouraging words and verses on the walls as the restoration continues.

“They offered us dehumidifiers and fans and all kinds of things we didn’t even know the OPC owned,” said Michelle, her voice breaking with emotion. She lost many books vital to her business of selling books online. Glenn, a professor, also lost a huge collection of books, many of which are hard to find.

Churches, religious and nonprofit organizations, and bighearted residents spread themselves over the flood-ravaged area to distribute food and other essentials, remove debris, and help people muck out their houses. But the OPC did more, the Mootses said.

“If all the OPC did was to help us to dry the house out, they would’ve been doing what other organizations were doing,” Glenn said. “But the difference was that the OPC said that they were able to help us rebuild, and a lot of organizations do not do that.” What seemed especially amazing was the OPC’s commitment to restore their house in time for Thanksgiving. 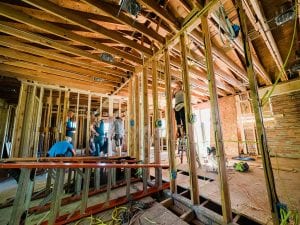 “Typically, the OPC gets involved in disasters that impact ten thousand or more people, or if the OPC is directly impacted,” said David Nakhla, OPC Disaster Response Coordinator. Besides the Mootses, another Christ Covenant family, Linda and Tom Kennedy, also saw their home severely damaged.

“At 4:30 in the morning [on May 19] we looked over the railing of the upstairs and saw five feet of water in our basement,” Tom said. “We were a bit in shock. Just in a very short period of time, all of the water was gone out of our house. It looked like someone had taken a giant mixer and just scrambled up all our furniture, even our paperwork—just everything.”

To Linda, it felt as though everything was gone, soaked. “It seemed like nothing mattered anymore.”

OPC volunteers used their equipment to dry out the house. Two groups of drywallers came. Some stayed to help with the “mudding”—putting a plaster-of-Paris type goo over the seams where the large pieces of drywall came together.

The Right People at the Right Time

Before the lofty rebuilding plans could be put into place, the OPC needed a site manager who could order construction supplies, find the fastest and most effective way to get the job done, use contacts to find skilled volunteers, and work closely with the families. That person turned out to be Mike Greene, who attends Christ Covenant and has extensive experience in project management. He’s a chemical engineer and has worked as a project manager for a large semiconductor plant near Midland.

Greene credits the success of his disaster relief work with the OPC to the Lord’s leading. At times, he thought he was out of resources with the clock running down. “Then, someone who had the necessary skills to get the job done would show up, out of nowhere,” he said.

He found a site foreman in Rob Brinks, a carpenter who brought a trailer with shower facilities and now travels to Midland twice a week. Greene located Cary Hirdes, a heating, ventilation, and air conditioning specialist from Zeeland, Michigan, who worked at the Kennedys’ house on the heating system and on drywalling.

“This is something we’re supposed to do,” Hirdes, a deacon at New Life Fellowship in Holland, Michigan, said matter-of-factly. In other words, it’s what a Christian does when there’s a need.

The OPC doesn’t have big fundraising drives the way some organizations do, Nakhla said. They tell churches, in short, “here’s the fund” to receive disaster relief money. Churches are then encouraged to collect offerings for disaster response. The OPC Committee on Diaconal Ministries has created the Midland Disaster Oversight Committee, which includes representatives from Midland and from the presbytery. The denomination augments volunteer labor with money that is primarily for materials. In Midland’s case, the committee has estimated a need of approximately one hundred thousand dollars to fully minister to these two families. Giving has been slower than usual, Nakhla said. This might be because Midland isn’t a major city, and there was no warning of the disaster to heighten awareness in the state or region. In addition, COVID-19 has caused financial hardships and work stoppages as well as dominating the news.

Master plumber Doug Baxter of Williamsport, Pennsylvania, said he heard Nakhla speak at his church, New Life OPC, and at a deacons’ conference. Baxter has been retired two years and recently sold his plumbing and heating business. When he heard about the need for help in the Midland area, he said simply, “I could do that.” His teenage grandson, Leif McDermott, has worked for his “Poppy” before and came to Midland to help him.

Baxter tore out the Mootses’ worn-out copper plumbing and replaced it with sturdier new materials. It was a big job and, for site manager Mike Greene, it was the answer to a desperate prayer. With limited resources and the uncertainties of COVID, many companies with construction specialties such as HVAC were tied up with other work. People are coming here from long distances, he said. These are people “whom I believe the Lord put here to make this a strong project.”

Brett Gillet, member of Immanuel OPC in Bellmawr, New Jersey, took a break from his carpentry business in order to travel to Michigan to help when he saw the flood on the news. “A lot of the things I do [at work] are small in scale,” he said. “When a project like this comes up, I can really flex my muscles and do a lot more.”

Others from OP churches have stepped up to help, strangers to both the Mootses and Kennedys. There is no fanfare, no glory, no awards. They do it because it is a calling from the Lord, as brothers and sisters in Christ, and it’s a beautiful thing.

If you would like to get involved with OPC Disaster Response, go to OPCDisasterResponse.org to find out more.

The author is a member of Christ Covenant in Midland, Michigan. Photos courtesy of Katie Plas, member of Harvest OPC in Grand Rapids, Michigan.