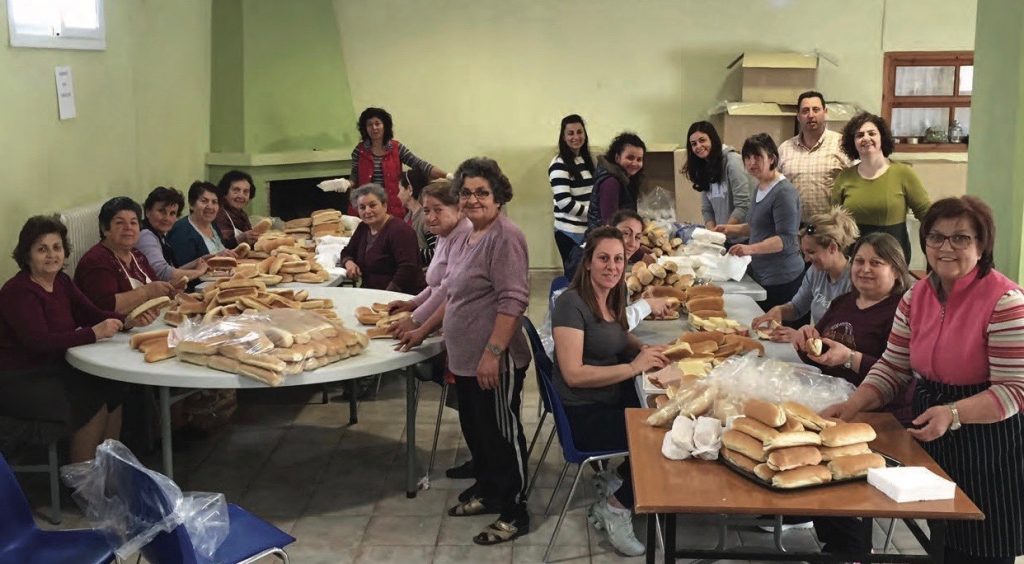 Sampach used to get up at 4:30 a.m. every morning to open his supermarket in Iraq. Within 24 hours of being told by ISIS to convert, pay up, or die, he left his supermarket and chicken farm behind and fled with his wife and children. Their journey took them to Greece, where for months Sampach had to restlessly idle his days away while waiting for the call from the UNHRC for the completion of their resettlement. But, at least they were safe from the violence and threats.

Sampach’s is just one of the many stories I had the opportunity to hear during my visit to Greece last month. I travelled there with Rev. Al Tricarico and OPC deacon Bob Fales to visit the various regions where the Greek Evangelical Church (GEC), a reformed Presbyterian denomination, is actively carrying out a ministry of Word and deed to the refugees passing through Greece.

The testimonies of both the refugees and those seeking to minister to them were moving. The active participation of the church in this ministry has changed the hearts of refugees and church members alike. It was delightful to watch the face of Savas, a GEC elder, light up as he showed us photos on his phone of the refugee families that are being hosted by his church in Milotopos, or to hear Meletis Miletiades, pastor of the GEC in Volos and moderator of the GEC, share the story of a Muslim man who, after crying for 15 minutes prior to entering the home the church had provided for his family, looked Meletis in the eye and said, “I thank God for putting love in your heart!”

The future of the refugees in Greece is uncertain. What is certain, however, is that the providential hand of the Lord has placed thousands of refugees within reach of various GEC congregations. These churches have sought to be faithful stewards of this opportunity, often going far out of their way to help out.

The ministry began in August 2015 when refugees on their way to Germany began to back up on Greece’s northern border in a small forgotten border-crossing called Idomeni, about 30 minutes from Milotopos. The church in this small rural town began to fix and provide sandwiches (often 1,000 at a time!) for the refugees who were living in tents. As the weather grew colder, they provided firewood to help them keep themselves warm outside their tents. One GEC elder, an electrical engineer, built a charging station for their phones and set up Wi-Fi so they could re-connect with family members who were behind or ahead.

Soon the whole GEC was on board, participating both physically and financially. This ministry represents a significant expense (each sandwich supply trip to the border cost ~$1,500!), but the Lord began to provide the funds through the gifts of many (including at least $18,000 from the OPC in 2016), and has continued to do so every step of the way in this journey of faithful service to the Lord’s command to love our neighbor, show kindness to the stranger, and protect the vulnerable. The positive witness to many Syrians, Iraqis, Afghanis, Iranians and others, many of whom may never have been exposed to Christians before, has been tremendous through the various ways in which “a cup of cold water" is being given in the name of Christ. But the impact in the lives of the believers who are responding to their Savior’s voice by doing unto others as they would have done to themselves has been immense as well.

When the borders north of Greece closed and it became clear that no more asylum-seekers would be allowed through, there was suddenly a need to house families longer term. The GEC in Milotopos began renovations on several properties to make living quarters available. They now have 5 families housed. Not only are they providing the rent, utilities, and a good bit of their food, they are also taking them to appointments, helping them with the immigration paperwork, teaching the adults English, and providing tutoring for their children (some of whom have not had the opportunity to be in a school for as many as three years). This new form of ministry, while a more extensive investment, allows for the development of relationships. And through these relationships, the GEC has had the privilege of seeing at least one Muslim-background family profess faith in Christ.

Sampach’s refugee trek was completed last year when he and his family were resettled in Spain. But how the Lord will use this Christian witness in and through our brothers and sisters in Greece remains to be seen. Some plant, some water, but the Lord in his time will bring the fruit. Soli Deo Gloria!