The Refugee Crisis: The OPC Perspective

The Refugee Crisis: The OPC Perspective 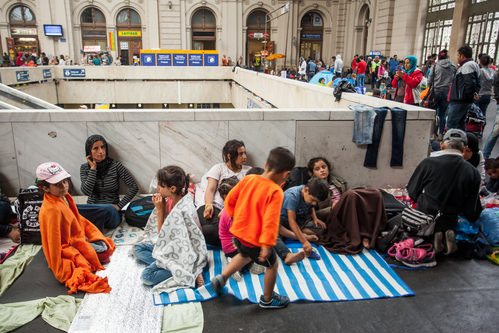 Budapest: 4 September 2015. Transit zone at the Keleti Railway Station for war refugees. Refugees are arriving constantly to Hungary on the way to Germany.

Through vivid news reports and video clips, we are all witnessing the refugee crisis that is currently facing the world. Multiple reasons, such as political oppression, ideological persecution, and open warfare lie behind this present day tragedy. How pitiful to behold great masses of people, young and old, fleeing their home countries in search of a safe place to live. Dramatic photos of capsized boats that contained too many occupants, or a young child’s body washed up on shore, tear at our heart strings. Conditions in refugee camps are often deplorable. One reporter confessed that her visit to a refugee camp dramatically changed her life. It has been estimated that the number of displaced persons and/or refugees could be as many as sixty million. Many governments are struggling with the predicament of absorbing large numbers of refugees into their countries.

The crisis is indeed overwhelming. How should we as Christians view it? Matthew in his gospel records that our Lord, in carrying out his ministry of proclaiming the kingdom of God and healing every disease, when he saw the crowds “… had compassion for them, because they were harassed and helpless, like sheep without a shepherd.” We may not be able to understand the ultimate reasons for the catastrophe that is unfolding before our eyes, but ought we not view this, in part, as an opportunity set before us by divine providence to do what we can to minister to these refugees, especially fellow believers who are being persecuted for their faith?

The OPC defines a major disaster as a calamity that arises suddenly and unexpectedly, resulting from an identifiable natural or man-made event such as an earthquake, volcano, flood, hurricane (or typhoon), famine caused by drought, or war, which directly injures the persons and property of tens of thousands of people in a defined geographic area. The OPC’s Committee on Diaconal Ministries (CDM) is responsible for assisting the denomination in coordinating disaster response, as well as addressing diaconal needs in the church or the world that are beyond the province and/or capacity of local diaconates or presbytery diaconal committees. As such, the CDM is currently exploring how best to provide appropriate help in the current situation, believing that the Lord would have us show compassion to these poor and needy people.

One of our principles of diaconal ministry is that material assistance should not be just a humanitarian effort but be accompanied by an active ministry of the Word of God. One way for us to do this could be to come alongside a sister denomination that is already engaged in such a ministry to refugees and help strengthen their hands so that they are able to do more. The Committee on Ecumenicity and Interchurch Relations (CEIR), and the International Conference of Reformed Churches (ICRC), through which our fraternal relations with other denominations are developed, are also able to provide accountability that the relief work in which we seek to become involved is accomplishing our intended purpose. Additional ways to serve could include sending out from our church evangelists who speak the language of some of the refugees, sending out deacons to help with material needs, or assisting congregations that wish to sponsor one or more refugee families.

As we are confronted with the reality of the present refugee crisis, we should see it as an opportunity to minister to those who have been torn from the safety and security of their normal lives and dispersed to various countries around the world. We may not be able to do much, but we ought to do what we can to minister to these exiles, that they may find their true refuge and safety in the mercy of the living God.

If you wish to make a gift towards refugee relief, click here for details. Thank you.

This article originally appeared as a Feature Article at OPC.org.