Wildfires Rage in Parts of Oregon

Wildfires Rage in Parts of Oregon

Home » Posts » Disaster Response » Wildfires Rage in Parts of Oregon
As wildfires continue to smolder in the western half of the state of Oregon, we have been receiving reports from OPC pastors in the area, keeping us updated on how their churches are doing, and of losses and damages within their congregations. Praise to the Lord, there has been no loss of life, though several families have lost their homes entirely. 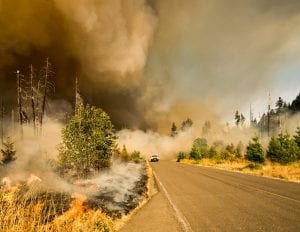 On Tuesday, September 8, we heard from Pastor Nicholson in Medford, Oregon as two families in his congregation, Trinity OPC, had fled their homes with only the clothes they were wearing. Their homes were completely lost, but it was not yet clear if they had homeowner's insurance, and how the local diaconate was equipped to help.
We have since heard again from Pastor Nicholson:

Please pray for the many people affected by the fires, that even in this God will make people aware of both his power and his grace. Pray that we as his people may reflect his compassion in these difficult circumstances.

Tagged: Disaster Response
×